Men's lacrosse: Johns Hopkins gets back on track with win vs. Albany

The Johns Hopkins men's lacrosse team scored the game's first seven goals and cruised to a 13-8 win against No. 16 Albany on Friday night to snap a three-game losing skid.

Ryan Brown scored three times in the first 15:30 for the No. 10 Blue Jays (6-3), who led 9-1 at halftime. Holden Cattoni led the way with four goals for JHU, Brandon Benn scored three times, and Wells Stanwick finished with a career-high six assists.

JHU hosts rival Maryland on Saturday at 2 p.m. The game marks the 111th meeting between the two teams. 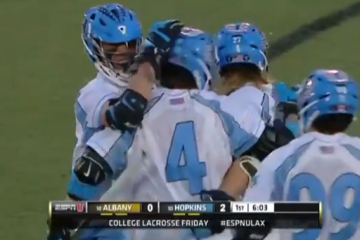