More than 3,500 from record applicant pool admitted to JHU Class of 2018

For the 11th year in a row, a record-breaking number of people applied for a spot in the incoming freshman class at Johns Hopkins University. 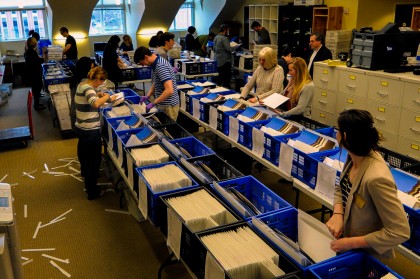 Image caption: Office of Admissions staff prepare welcome packets for the more than 3,000 regular decision applicants who have been admitted

The 22,281 applicants in the regular decision pool are the most in the school's history, 16.2 percent more than applied last year.

"It really speaks to the growing appeal of the Johns Hopkins undergraduate experience," said Ellen Kim, director of student admissions. "The chance to study at an institution with a flexible curriculum and a spirit of research at its core has grown in popularity for high-achieving students who are looking for ways to explore their intellectual interests."

In all, there were 23,875 applicants (including early decision), making the Class of 2018 the most competitive regular decision applicant pool in the university's history.

Acceptance notifications went out to 3,070 high school seniors today. Together with the 526 students admitted from early-decision period, 3,596 have been offered a spot in the class. The freshman class is expected to include about 1,300 students.

Of those admitted to the Class of 2018, 50.8 percent are women and 29 percent come from under-represented backgrounds—black, Hispanic, Native American and/or Pacific Islander. Forty-three percent of the admitted class was offered institutional need-based grants, up from 38 percent a year ago. The middle 50th percentile of the admitted students' SAT scores range from 2070 to 2340.

"This is a competitive group with diverse academic interests and leadership in a range of extracurricular fields, and we are so excited to see how they will make an impact on our campus," Kim said.

Tagged office of admissions, class of 2018 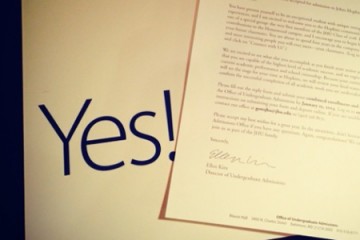