His latest, 'Down to the Last Pitch,' chronicles dramatic Twins-Braves series 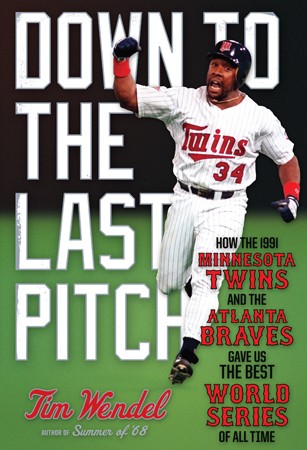 Grass is coming out of hibernation. Somewhere, hot dogs are warming. And hope for 30 teams is in the air.

Just in time for the start of the 2014 Major League Baseball season, author Tim Wendel offers up his latest book about out national pastime, Down to the Last Pitch (Da Capo Press, 2014), an in-depth, game-by-game account of the 1991 World Series between the Minnesota Twins and the Atlanta Braves.

Hailed as perhaps the sport's best postseason finale ever, the unlikely matchup featured two small-market teams that both had finished last in their respective divisions a year earlier. The series itself was like something out of a Hollywood script—five of the seven games were decided by one run, four of them on the last pitch. Three games went to extra innings, including an unforgettable Game 7. Kirby Puckett and Tom Glavine became legends.

For Wendel, a writer-in-residence at Johns Hopkins and a founding editor of USA Today Baseball Weekly, professional baseball remains fertile creative ground. His previously books include Summer of '68: The Season That Changed Baseball, and America, Forever (Da Capo, 2012), High Heat: The Secret History of the Fastball and the Improbable Search for the Fastest Pitcher of All Time (Da Capo, 2011), and Castro's Curveball (Ballantine Books, 1999), a work of fiction set in Cuba in the late 1940s.

We recently caught up with Wendel, an exhibit advisor to the Baseball Hall of Fame, to talk about the 1991 World Series, his love of the game, and the upcoming MLB season.

What prompted you to revisit the 1991 World Series now?

This was the first World Series I covered as a journalist. I just love these watershed moments. People have been a little dismissive of the early 1990s, but this is a time of massive transition, really. Within baseball, this is the sweet spot before the steroids era and the money gets really big. Think about it—that year the Oakland A's had one of the highest payrolls. It wasn't a matter of the haves and the have-nots.

Structurally, I wanted to do something a little bit different. So I came up with the seven sections, each focused on a particular game in the series with subplots such as steroids and the construction of [Oriole Park at] Camden Yards, which opened the following year.

What makes this series so historically great?

Some have argued it's the best ever. To have all the games, with the exception of one, so close and four literally end with the last pitch was just incredible.

I didn't think of this initially, but the Red Sox, Yankees, Giants, and Dodgers—all the historic franchises and traditional rivals—maybe get too much attention. I guess in some way I'm championing small-market teams with this book. Here is this great series with two teams in fly-over country. The games were so enthralling, it just pulled people in. For some perspective, The Atlanta Journal Constitution halfway through the series ran a story that warned people that these games were so taut and suspenseful that they might want to turn away out of concern for sleep deprivation and how it might impact their jobs.

What about the characters made this series interesting?

Kirby Puckett comes to mind. He's always been interesting to write about. With Puckett you have the rise and fall of an American hero, although [the 1991 Series] is all before the eye glaucoma that forced him to retire and his later struggles with his personal life. And this period is tethering the point of what the game used to be and what it would become with the rise of PEDs. Players still looked like us, for the most part. Look at Tom Glavine.

What's interesting about your book is how you veer from the series itself.

I got to riff on ballparks and ballpark construction, like when I talk about Janet Marie Smith. She was the one who changed the thought process on the building of Camden Yards. In the original blueprint, the warehouse was leveled to make way for a surface parking lot. But she championed for a mix of the old and the new in the design, which has influenced the construction of other ballparks since then.

What is the best baseball book in your estimation?

For fiction, The Celebrant by Eric Rolfe Greenberg is as good a piece of historical fiction as anything I've ever read. The Brothers K (by David James Duncan) I would put right after that.

In terms of nonfiction, Jane Leavy's Mantle book (The Last Boy: Mickey Mantle and the End of America's Childhood) was just brilliant, just how it starts and then moves on to something else. Clemente by David Maraniss was also very, very good. David is the kind of writer that would scare me off a project. If he were working on something I was looking into, I'd find something else.

What is your take on the state of baseball today?

I think baseball is much more resilient than people give it credit for, but two things worry me. One is PEDs. I think they've gotten a good handle on it here, but there are countries outside our purview where it still is a major issue. Secondly, this is a romantic time of year when teams all think they can be the Twins or the Braves circa 1991, but their hopes are probably more doubtful. Maybe we need even more revenue sharing or some other solution. Look at the NFL, where the Green Bay Packers have every bit as fair a shot at the title as the New York Giants.

In your writing, what keeps bringing you back to baseball?

I was talking about this with John Grisham, and why there are so many baseball books out there. I think baseball from a writing standpoint breaks down to great one-on-one moments. It's pitcher versus hitter. Fielder versus the ball. Manager versus manager in a great game of chess. That's what makes it really fun to write about and makes the game come alive. Plus the pace, the nature of the game makes it easy to break away from the narrative and segue into talking about subjects like Pete Rose or Scott Boras or steroids.

If you were commissioner of baseball, what would your first rule change be?

I would take a long, hard look at the DH rule. I don't have a definitive thought one way or the other, but having the two leagues with different rules is kind of crazy. On one hand I love the National League game and the strategy involved, but then some of the best players in recent memory, like Paul Molitor and David Ortiz, have been able to extend their careers because of the DH.

And I'll tell you, I would do something with the All-Star Game. I've had it with that. Maybe we can do something like the NHL does and make it more of a who-is-the-best-in-the-world deal, like the United States versus the World.

What team do you root for?

I grew up a Red Sox fan. I lived in upstate New York, a town called Lockport, the birthplace of Joyce Carol Oates. My little league team was the Red Sox, so I just adopted them. Now my allegiances are closer to home—I regularly follow the Orioles and the Nats.

I still remember the game Tony Conigliaro got beaned in in 1967. But the first game I went to was a minor league game in Buffalo, N.Y., with my grandfather. Johnny Bench was playing—it was just before he got called up by the Reds. It was at The Rockpile [War Memorial Stadium] where they filmed most of the baseball scenes for the Redford film The Natural. Funny story, the guy who they lifted on the mound just before Redford hit the home run was as a guy I knew in high school, Phil Rosenberg. I've always said, if they just kept Rosenberg on the hill the movie would have ended differently [laughs].

Are you ready for opening day?

I'm always excited about this time of the year. Everybody has a chance, although by Memorial Day some teams are unveiled as not being the real deal. I'm really intrigued by the local teams. I think the Nats are going to be really good, and the Orioles could surprise. I've always liked Buck Showalter since the days when I covered him as a writer. He's a straight shooter.

I guess I'm rooting for surprises. That is why I enjoyed writing this book so much. These two teams went from last place to first. It's what fans hope for, to have your team rise from the ashes and win a championship.

Tim Wendel will speak on the university's Homewood campus on April 24 from 6:30-8:30 p.m. at Shaffer Hall as part of Advanced Academic Programs' Oddesey offerings, and at Politics & Prose Bookstore in Washington, D.C. for a talk and book signing at 1 p.m. on April 27