On January 30, 2011, Zach Wahls addressed the Iowa House Judiciary Committee during a public hearing on a proposed amendment to ban gay marriage. If you're not one of the millions of YouTube viewers who have watched his impassioned speech, you can do so now. Seriously, just click that link. We'll wait. 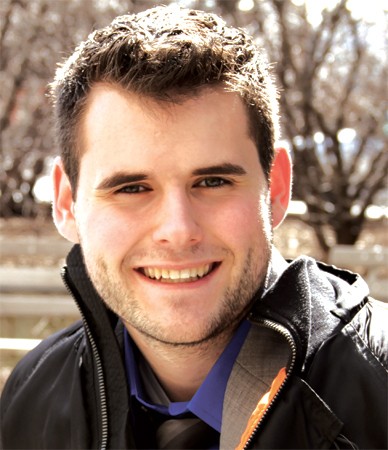 Zach brings an interesting perspective to LGBT discussions: he's a cisgender, straight 22-year-old man who was raised by two lesbians. His memoir My Two Moms earned him critical acclaim from many people, including Jon Stewart and Ellen DeGeneres, who have both had him as guests on their shows. The structure of the book, subtitled "Everything I Need to Know About Gay Marriage I Learned in Boy Scouts," is based Boy Scout Law, with chapters titled Obedient, Trustworthy, Kind, etc.

Zach grew up as an Eagle Scout, and he is currently the Executive Director of Scouts for Equality. He also founded a small company called Iowa City Learns, which employs high school students to tutor other high school and junior high school students. Additionally, Zach is a full-time student at the University of Iowa finishing up his undegraduate degree in sustainability studies.

On Sunday, Zach will be speaking at the B'more Proud conference, which is being held at Johns Hopkins University. (Registration is free; find more information in our calendar)

We caught up with Zach to talk about his upbringing, his book, and the viral video that started it all.

How did you end up addressing the Iowa House Judiciary Committee?

It's actually a long story. I was asked to testify because of an editorial that I wrote for The Des Moines Register when I was a senior in high school. My senior year, I was the columns editor of my high school newspaper, and that was the year that the Supreme Court's decision legalizing same-sex marriage in Iowa came down. I always remind people it wasn't civil unions or domestic partnerships—it was actually marriage. This was obviously a really, really big deal, and I was very happy. And I happened to have a unique perspective to write about it. So I wrote this column, and I wanted to put it in The Des Moines Register. Then about a year and a half later, when this hearing was scheduled, some of the organizers for that thought it might be useful to have the perspective that the son of a same-sex couple might bring. So they looked me up on Facebook, got in touch, and invited me to go speak.

You ended your speech by saying "the sexual orientation of my parents has had zero effect on the content of my character." That line reminds me of something Dr. King would say. Was that wording intentional?

Yeah, that was absolutely intentional. When I was a child, I remember reading about Dr. King, and his march on Washington, his "I Have a Dream" speech. He was definitely a man whose ideas had a big impact on me. And so when I was trying to figure out what I had to say if I had to go talk about my family, he was certainly somebody that I was looking up to in that respect.

You wrote a column for The Des Moines Register advocating for civil unions. Has your position on that changed?

That was a while ago. My perspective on this has definitely evolved from where it was then. I never supported civil unions in the conventional way they were used as a half-step to marriage equality—I've always been a strident supporter for marriage rights for same-sex couples. My point in that column was that making civil unions the norm for all couples—and I think that's the nuance that's lost in the current set up—could be a politically workable next step after the Varnum decision. My thought then was, look, this will be a good compromise. This will satisfy both parties. But what I've since come to understand is that there's so much value, so much tied up in that word "marriage." It is, I think, certainly possible that we might someday get to a place where we live in a society that the document you fill out from the government office is called a "civil union." But I think at this point in time, the onus cannot be on the LGBT community to make it happen. As long as that document is called a "marriage license," then that's the phrase that we have to talk about.

You talk about how you identify less as an LGBT ally and more as a member of the LGBT community. Why is that?

Whenever you're talking about identity, obviously it gets very complicated very quickly. Even though I don't personally identify as LGBT, the fact is growing up with LGBT parents, that was the identity I was raised with socially and culturally. And even though my family didn't go to pride parades or anything like that growing up in rural America, the cultural understanding of who my family was, and what it meant to be part of our family, was tied up in the fact that we had two moms.

And certainly even though that wasn't necessarily something we spent a lot of time talking about, it was absolutely how our family was perceived by people outside of our family. I remember very vividly when I was in the 8th grade, watching the 2004 Republican National Convention for school. I was taking a class about the media, and we had to watch these speeches. I remember listening to Rick Santorum talk about how dangerous families like mine were. It was, "Your family's bad, your family's dangerous." So even though I didn't identify necessarily with my parents directly regarding their sexual orientation, I certainly am part of my parents' family. And culturally, I think that is how I would identify: as part of the [LGBT] community

Civility is very important to me. Civility is how I was raised. In the Midwest, we're a very calm … I think, generally, a very friendly place. That's generally the mentality that we bring; not necessarily at all times and in all places, but that is certainly an important value to us. That was something I was raised with: having dinner with people, breaking bread, and understanding the cultural and personal importance of that. We went out to eat for the Out To Dinner project once, then I got swept up into the campaign to end discrimination in the Boy Scouts. But it was something that I was very proud of, and I'm glad we had the success we did.

How do the Boy Scouts feel about your work?

The Boy Scouts signed off on the book. We quoted their material at length, so we went to them, and we talked with them to make sure it was OK that we talked about the scouting program and the values and all that good stuff. And if you look very closely at the opening pages of the book with all of the copyright and label stuff, there's a disclaimer saying that this is not a publication of the Boy Scouts. The reason is because they read the book and said, "While we think Zach clearly turned out OK and he enjoyed his time in scouting, we want to make sure people know this is not a book about the Boy Scouts that we have sanctioned." So there was definitely cooperation and I was thankful for that. Frankly my time in scouting was overwhelmingly positive. You know, like all things in life it wasn't always easy. But I would say 95% of the time, it was a very joyful and positive experience for me.

Your family dealt with an incident back in 2006 when the hospital treating your mom Terry refused to recognize your other mom as Terry's legal spouse. Can you talk about that?

I'll talk about that during my lecture for sure. It's a story that captures in unfortunate clarity how damaging the cultural otherization that LGBT people face can be on their day-to-day lives. One of the real dangers is, today we have so many conservative folks who say, "We don't really care about same-sex marriage. Why can't they use another word?" But unfortunately, what a lot of them just don't understand is how much they're taking for granted: [for instance] the recognition that their own relationships receive by virtue of being male-female as opposed to a male-male or female-female couple. It's just a whole other world once you have that basic human recognition. 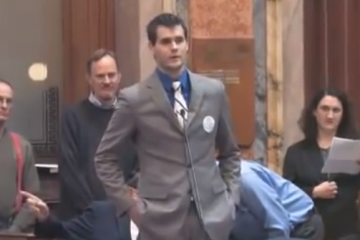