Johns Hopkins senior Henry Stauber closed his career with a sixth-place finish, and junior Paul Bewak placed seventh at the NCAA championships in Cedar Rapids, Iowa, on Saturday, as the Blue Jays had two wrestlers earn All-American recognition for the second time in school history. The top eight finishers in each weight class are named All-Americans. 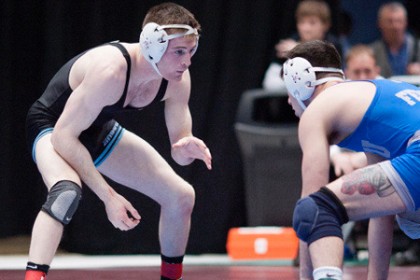 Wrestling at 141 pounds, Stauber opened the second day of the two-day meet with a 2-1 consolation bracket win against eighth-seeded Matt Holmes of Loras. A 6-3 loss in his next bout bumped him to the fifth-place match, where he lost 5-4 to Michael Ferinde of Johnson & Wales.

Stauber's sixth-place finish is the second-best in school history, surpassed only by Paul Marcello'srunner-up finish at 141 a year ago. He finished the season with a 26-13 record and closes his career with an 81-47 mark.

Bewak closed his season with a 10-4 victory over Sean Ambrocio of Concordia (Wis.) in the seventh-place match to finish with a 36-3 record. His 36 wins are a Johns Hopkins single-season record.