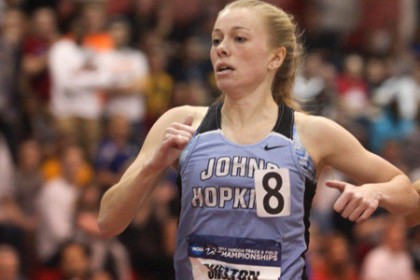 Maggie Shelton took second in the women's 800 meters, finishing in 2:08.94 to break her own school record in the event. She came in less than four-tenths of a second behind Kylee Verhasselt from Wisconsin-Oshkosh. Shelton's time ranks fifth all-time in Division III history.

In the men's 800, JHU's Andrew Carey finished in 1:51.58, less than three-tenths of a second behind win McKenna Ramos, also from Wisconsin-Oshkosh. Carey set a school record in the event in Friday's preliminary heat with a career-best time of 1:51.42.

The Blue Jays kick off the outdoor track season on March 29 at the Maryland Invitational.