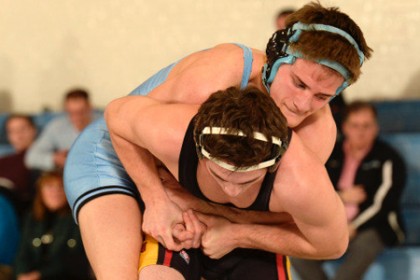 You can't just outmuscle an opponent. You must outmaneuver him.

This weekend, two Blue Jays wrestlers will try to do something that no other Johns Hopkins student has done before—win an NCAA title in the sport. Norris thinks junior Paul Bewak and senior Henry Stauber might have the right combination of brains and brawn to pull it off at the NCAA Division III Wrestling Championships, which begin Friday at the U.S. Cellular Center in Cedar Rapids, Iowa.

Bewak (32-1) has already ventured into uncharted territory. He is seeded No. 1 out of 18 competitors at 125 pounds, making him the first JHU wrestler to earn a top seed at the NCAAs.

Speaking from a hotel room in Iowa on the eve of the competition, Norris said that Bewak is ready and in a good mental place.

"Being named a No. 1 seed certainly is a confidence boost, but it also brings with it extra pressure and an expectation to perform," said Norris, now in his ninth year as the Blue Jays coach. "But Paul is prepared to perform, and he has the ability to make it to the championship match."

Bewak punched his ticket to the NCAAs with a first-place finish at the NCAA East Regional Championships two weeks ago. He's making his third consecutive appearance at the NCAA meet—he earned All-America honors with a seventh-place finish as a freshman but lost both of his matches. Norris said Bewak's performance a year ago drove him to be better.

"He didn't perform the way he wanted to, and he realized that," Norris said. "He came into this season really focused. He learned not to over-train. He needed to cut back on some parts of his workouts in the offseason, which wasn't easy. Paul is an intense person. But he's grown as a wrestler. The skill was always there, now he's equally mentally prepared."

Bewak is two wins shy of tying Eric Fishel's record for career wins by a Johns Hopkins wrestler. Right now, getting that first win under his belt this weekend is the most important, and that's what Bewak is trying to focus on.

"Paul is a very smart wrestler," Norris said. "He doesn't put himself in a bad position. Plus, he has seen a lot of his opponents before. We see a lot of these guys during the season, and for those he hasn't wrestled there is videotape footage. He knows the competition."

Stauber (23-10) is making his second trip to the NCAA championships and will compete at 141 pounds. He spent the first half of the season wrestling at 149 pounds, then posted a 14-2 record since moving down to 141. Stauber won the Centennial Conference title and finished as the runner-up at regionals.

The first round of competition begins Friday at noon. Live video of all matches can be seen at www.ncaa.com.