Playing away from Homewood Field for the first time this season did nothing to derail the Johns Hopkins men's lacrosse team's early-season momentum, as the fifth-ranked Blue Jays rolled to a 15-9 win at No. 10 Princeton on Saturday. 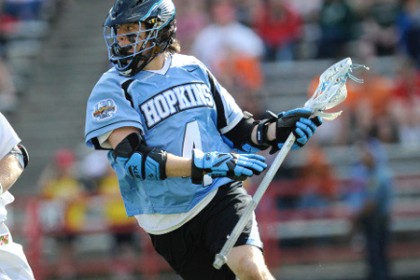 Image caption: Ryan Brown scored five times against Princeton and has a team-high 12 goals on the season.

Sophomore Ryan Brown paced the Johns Hopkins attack with five goals and three assists, giving him a team-high 12 goals for the season. Junior Wells Stanwick added three goals and two assists, and Rob Guida and Connor Reed had two goals apiece. The Tigers owned a 37-35 advantage in shots, but goalkeeper Eric Schneider made 13 saves for JHU.

The Blue Jays will stay on the road for their next two contests, visiting Mount St. Mary's on Tuesday and UMBC on Saturday before returning home to face No. 8 Syracuse on March 15.