Insomniac's brain 'like a light switch that is always on,' Hopkins researcher says

Researchers at Johns Hopkins have made an important discovery about people with chronic insomnia—the part of their brains that controls movement is more active and more adaptable to change than that of people who sleep normally.

The team focused on the motor cortex, located at the back of the frontal lobe, and found increased plasticity and excitability among neurons in this region in patients with insomnia. Their findings, detailed in the March issue of the journal Sleep, add evidence to the notion that insomniacs are in a constant state of heightened information processing that may interfere with sleep.

"Insomnia is not a nighttime disorder," says study leader Rachel E. Salas, an assistant professor of neurology at the Johns Hopkins University School of Medicine. "It's a 24-hour brain condition, like a light switch that is always on. Our research adds information about differences in the brain associated with it."

Researchers say they hope their study leads to better diagnosis and treatment of the common sleep disorder, which effects an estimated 15 percent of the U.S. population.

To conduct the research, Salas and her colleagues worked with 28 adult participants—18 who suffered from insomnia for a year or more and 10 considered good sleepers with no reports of trouble sleeping. They delivered periodic electromagnetic currents to precise brain locations to disrupt function using a painless, FDA-approved procedure called transcranial magnetic stimulation, or TMS.

Each participant was outfitted with electrodes on their dominant thumb and an accelerometer to measure the speed and direction of the thumb. The researchers then gave each subject 65 electrical pulses, stimulating areas of the motor cortex and watching for involuntary thumb movements. Subsequently, they trained each participant for 30 minutes, teaching them to move their thumb in the opposite direction of the original involuntary movement, then introduced the electrical pulses once again.

The idea was to measure the extent to which participants' brains could learn to move their thumbs involuntarily in the newly trained direction. The more the thumb was able to move in the new direction, the more likely their motor cortexes could be identified as more plastic. Because lack of sleep at night has been linked to decreased memory and concentration during the day, Salas and her colleagues suspected that the brains of good sleepers could be more easily retrained. The results, however, were the opposite. The researchers found much more plasticity in the brains of those with chronic insomnia.

Salas says the origins of increased plasticity in insomniacs are unclear, and it is not known whether the increase is the cause of insomnia. It is also unknown whether this increased plasticity is beneficial, the source of the problem, or part of a compensatory mechanism to address the consequences of sleep deprivation associated with chronic insomnia. 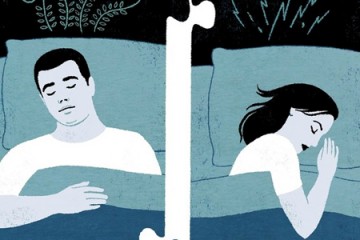