After building a four-goal advantage, the Johns Hopkins women's lacrosse team was held to one goal in the second half of Wednesday's matchup with fifth-ranked Loyola. Fortunately for the Blue Jays, it was the only goal they would need. 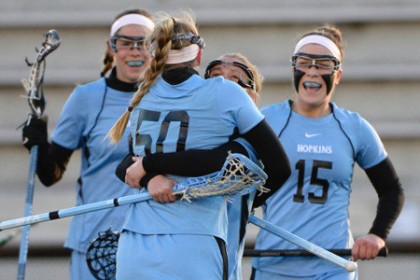 Sophomore Jenna Reifler's goal with 5:50 to play ended a JHU scoring drought that lasted 33:19 and propelled the Blue Jays to a 6-5 win against the Greyhounds at Homewood Field in the first-ever Lacrosse Coaches vs. Cancer women's lacrosse game. Johns Hopkins, ranked 20th, improved to 4-0, while Loyola fell to 2-1.

JHU amassed a 5-1 advantage over the game's first 21 minutes thanks to two goals apiece from seniors Taylor D'Amore and Sammy Cermack and a score from senior Sarah Taylor. But after totaling 52 goals in their first three games, the Blue Jays endured a long scoring drought. Loyola chipped away at the lead and pulled even on a goal by Hannah Schmitt with 9:01 remaining.

That set the stage for Reifler's game-winner. Her free position shot was denied by Greyhounds goalkeeper Molly Wolf, but she collected the loose ball and beat Wolf to put JHU back in front.

Johns Hopkins returns to action Saturday against American at 1 p.m. at Homewood Field.