Just in: In tell-all interview, editor reveals 'The Onion' is satire 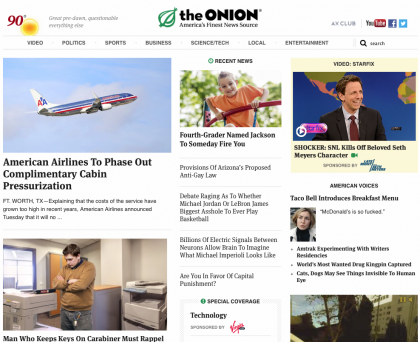 That's currently the lead headline over at The Onion. And if you're not sure yet, you should know—that headline is a total joke.

All the headlines and stories are jokes on The Onion, an award-winning satirical news organization. Of course, that doesn't stop unwitting readers from taking some of the headlines seriously!

So how does The Onion work behind-the-scenes? What is the day-to-day joke grind like? Where does the writers' seemingly endless supply of humor come from?

We just might get some insight tonight at Shriver Hall, where a staff writer from The Onion will visit as part of the Johns Hopkins Foreign Affairs Symposium and talk about the life at "America's Finest News Source." Admission is free, although reservations are recommended since seating is limited. The event, cosponsored by the Hopkins Organization for Programming, will also be livestreamed on the Foreign Affairs Symposium Ustream channel.

We here at The Hub are stoked about the lecture … so stoked that we actually couldn't wait until tonight! So we called up Jocelyn Richard, The Onion's features editor, for a pre-game.

Hey Jocelyn! So how did you end up at The Onion?

I basically started with The Onion the day after I graduated from college. I flew to New York, and I was an editorial intern, then I've kind of just been involved with it ever since. I started contributing, then I did a fellowship, and then I got hired. It's my first comedy job, and it's the only thing I've been involved with since college. I got some lucky breaks. I had a lot of people helping me.

Did you always plan on doing comedy?

I always had an interest in writing comedy. I used to watch Conan, and The Simpsons—those were the two main things I watched growing up. Once I started reading The Onion, which was middle or high school, it got stuck in my mind. I thought it was so good! Then in college, it seemed like a pipedream to say, "Oh, I want to write for The Onion," but I decided to go for it and it worked out. So that's pretty good.

Is your path to The Onion's writing table pretty typical?

People just come from all over. One of our writers studied classical guitar in college. Another guy studied business economics. Another guy was a playwright. It's just a big group of people that, all together, have this really big pool of knowledge to write jokes off of, which is pretty great.

I think the one thing all of the writers on staff have is just this wide reference space. They know a bunch of movies from the '70s, or pop culture stuff. They know history stuff, they know literature stuff. People just seem to have a lot of knowledge about a lot of obscure things. And generic stuff, too. You know, how are movies defined by genre and how can you make fun of that stuff? People just seem to know a lot about different things here.

It's like a writers' room for any other comedy show. It's a bunch of people in a room, pitching things to each other, brainstorming things, duking it out, trying to make each other laugh. We all pitch headlines, then we talk over them, and decide which ones we like. Then we brainstorm them, and talk about them, and talk about how we want to frame the story, and what sort of jokes we want to include. Then we assign it to one person to write the draft.

When we write a headline, we get at a topic from a bunch of different angles, the same way "The Daily Show" might do at the top of their show. We might try to make a comment on how the media is covering it, or how people are reacting to it. There's a difference between what's going on and the way the media covers it. And those are both topics we address in headlines. Just because the media is choosing to cover it in one way doesn't necessarily mean it reflects the reality of the situation.

Sometimes it's difficult to distinguish a real headline from one of yours.

You know, a lot of times when people say, "That sounds like it could be on The Onion," it really isn't something that we would write. Just because something is outlandish doesn't mean that it's something that would be on The Onion. Because we make jokes, you know, and we write satire. We're not writing things that are so outlandish that they just shock people. That's not the intent. That's not what satire is.

How do you define satire?

That's a good question. You write it all the time, but then you step back and say, "What is it?" Hmmm. Satire? You're exposing or criticizing something. I mean, you're punching up, you're making a certain point, you're ridiculing something, you're exposing truth behind power, and things like that. If you have, let's say, a headline that somebody writes and all it does is say something that is untrue, that's not necessarily satire. You have to say, "What is this saying? Is this saying anything?"

What do you think it is about The Onion that keeps bringing us back to it?

Humor is something people are attracted to. You want to partake of it, you want to laugh. That's something that draws me into it. Satire seems so intuitive to me. I don't think I would approach [the news] in any other way. You're taking an issue and allowing people to access it through humor. And you're exposing what's ridiculous about it, and peeling away all the layers of bureaucracy, or the layers of conceit, and the media bias. And you're exposing something that's really important to people. I think this generation is socially conscious, and people care a lot. So when you're able to access these issues through humor, it's really effective.

What's one of your favorite headlines you've written?

Oh, that's a good one! Thanks, Jocelyn. See you tonight.