Women's lacrosse: Blue Jays ready to take the next step

After near miss a year ago, JHU eyes first NCAA berth since 2007 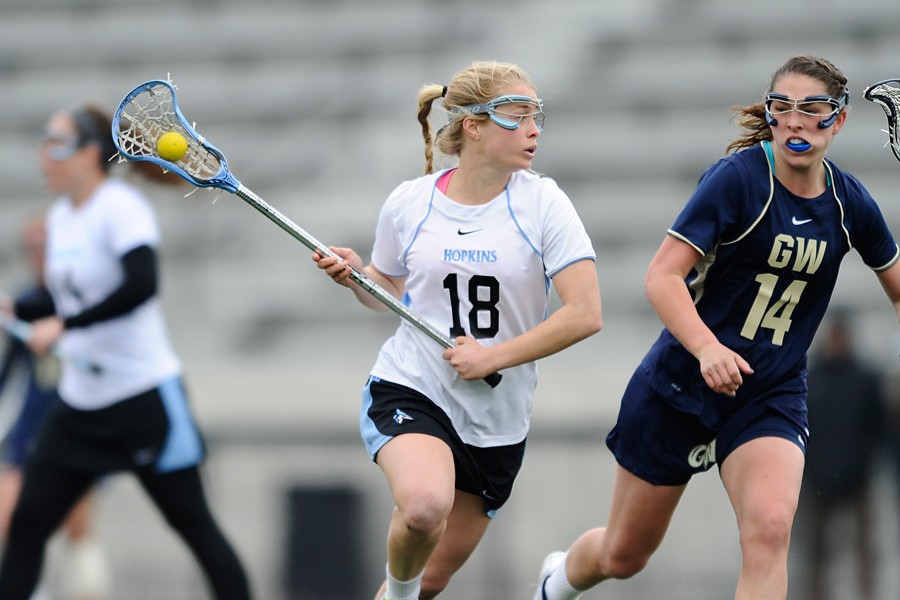 Janine Tucker appreciates coming close, but she doesn't have to like it. 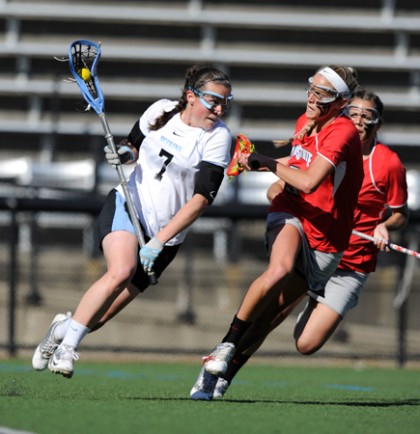 Last season, Tucker and the Johns Hopkins women's lacrosse team finished 10-7 with impressive wins against Virginia and Loyola, but the Blue Jays fell short of their goal to earn a spot in the 26-team NCAA tournament.

The campaign marked the third consecutive season the Blue Jays showed they could go toe-to-toe with anyone in the country, Tucker says, but could not overcome inconsistency.

"Last year was especially difficult. We were certainly in the discussion for an NCAA berth, but we had some tough losses that ultimately cost us," says Tucker, now in her 21st season as JHU's head coach. "The common thread among our defeats was not valuing the ball. We suffered critical turnovers at critical times."

With that in mind, Tucker and her staff implemented an offseason training program with an emphasis on ball control and decision making. Specifically, they worked on knowing when to push the ball up the field and when they're best served by a conservative approach. "Some games you might be outmatched. It happens," Tucker says. "But you never want to beat yourself."

The team also brought in a new offensive coordinator, Steele Stanwick, a standout player during his time at Virginia and winner of the 2011 Tewaaraton Award, given annually to the best collegiate lacrosse player in the country. Stanwick is currently an All-Star player with Major League Lacrosse's Ohio Machine.

What impact will the changes have? We're about to find out, and initial indications are promising.

Johns Hopkins kicked off the 2014 season Saturday with a 16-2 win at home against Marquette, and six of the team's next eight games will be played at Homewood Field. Yet the Blue Jays, who will compete in the American Lacrosse Conference for one more season before becoming an independent in 2015, by no means have an easy road ahead. Six of the Blue Jays' opponents made the NCAA tournament last season and are ranked in the top 20 in the Inside Lacrosse preseason poll, including Virginia, Penn State, and Loyola. The Feb. 26 contest against the Greyhounds is the Blue Jays' annual "Coaches vs. Cancer" game and will be aired on ESPNU.

The Blue Jays will be led by a trio of seniors: Taylor D'Amore, Sarah Taylor, and Sammy Cermack. D'Amore scored 29 goals last season and led the team in assists, points, draws, and ground balls. The attacking player was an alternate on the gold medal winning Team USA at the FIL World Championship this past summer, and she represented her country in January at the Champion Challenge in Lake Buena Vista, Fla. D'Amore was named a second-team All-American by the Intercollegiate Women's Lacrosse Coaches Association and was one of 25 female players nominated for the 2013 Tewaaraton Award.

The Blue Jays attack will be augmented by 2013 ALC Rookie of the Year Dene Demartino, who was second on the team in goals (35) last season.

"Dene is an impressive player and fun to watch. She plays with a lot of joy and flare," Tucker says. "Collectively, our attacking players and mids complement each other well, and we expect a lot from them this season."

On the defensive side, expect to see a lot of new faces. The team graduated nearly its entire starting defense and lost Cosette Larash, the team's goalie the past four years.

Tucker says the Blue Jays have switched to playing a more straight-up zone defense, a new philosophy the team tinkered with during its fall schedule of exhibition games.

There will be changes on offense, too, beginning with adapting to a new voice.

"Bringing in Steele was a little outside the box for us, but we feel it was a very important hiring," Tucker says. "He brings a fresh perspective and knowledge of the men's game. But he definitely has an appreciation for the women's game as his sisters played lacrosse at a very high level and were rock stars in their own right."

Stanwick, Tucker says, has been working with the players on ball and body movement, and how to set picks and run off screens.

"The players have already developed a really nice chemistry," she says. "I think we worked through a lot of things during our fall season. We are battle-tested."

Tucker says the Jays have their eyes set on an NCAA tournament berth—their first since 2007—and a conference championship.

"The NCAAs have a relatively small field, but we feel we should be one of those teams," Tucker says. "In fact, we want to be in the top 10."