Senior Brandon Benn scored 59 seconds into the third sudden-death overtime period, propelling the Johns Hopkins men's lacrosse team to a thrilling 10-9 win against Ohio State in the season opener for both teams at Homewood Field on Sunday afternoon. 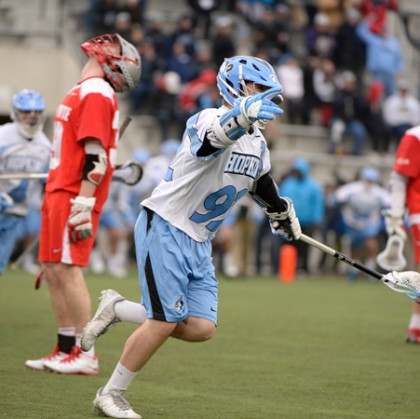 The No. 11 Blue Jays (1-0) led by three goals in the fourth quarter after Ryan Brown scored with 7:50 to play. But the 14th-ranked Buckeyes (0-1) rallied with three consecutive scores—including two from Jesse King, who scored five goals in the game—to force overtime.

The first two five-minute overtime periods were scoreless, though they were no without drama. Ohio State fired seven shots and enjoyed a 60-second man advantage at one point.

In the third overtime, Benn collected a pass about 20 yards to the right of the OSU net, ducked past a Buckeye defender, then rocketed a shot past Ohio State goalkeeper Greg Dutton (11 saves). The goal ended the second-longest game in JHU history, surpassed only by a four-overtime loss against Virginia in 2001.

Benn and Brown each scored twice for the Blue Jays, and Wells Stanwick had a goal and five assists. Rob Guida, Michael Pellegrino, John Crawley, and Holden Cattoni also scored for Johns Hopkins, which outshot the Buckeyes 42-35 and enjoyed a 19-5 edge in faceoffs. Goalkeeper Eric Schneider had 13 saves for JHU.

The Blue Jays host Towson on Saturday at 4 p.m.