Findings could lead to improved strategies for pain management

You know when you whack your thumb with a hammer, and your whole hand begins to throb? 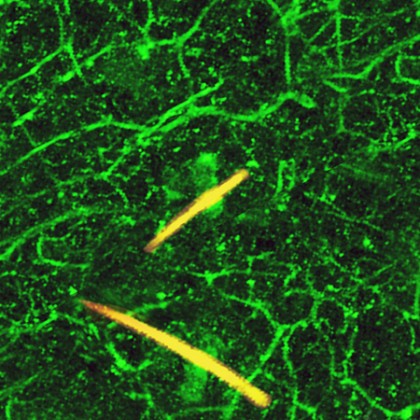 Image caption: Nerves in mouse skin that are actively responding to the painful stimulus capsaicin have been genetically engineered to glow green. Hairs appear in yellow.

Doctors call that referred pain—pain that you perceive in a location where it didn't originate. Which is just a fancy way of saying, "I stubbed my toe, and, oh gee, now my eyelid hurts!"

Sometimes that referred pain can become chronic pain, persisting for weeks, months, or even years after the initial injury or condition is resolved. Chronic pain afflicts an estimated 20 to 25 percent of the population worldwide, and about 116 million people in the U.S. alone. The consequences of chronic pain are costly: Researchers estimate that it costs Americans $600 billion a year in medical interventions and lost productivity.

Researchers at Johns Hopkins University and the University of Maryland have set the stage for possible advances in treatment, reporting they have pinpointed two molecules involved in perpetuating chronic pain. Their findings were published online Jan. 23 in the journal Neuron.

By identifying these molecules, doctors now have additional targets to block in their attempts to decrease chronic pain. According to Xinzhong Dong, associate professor of neuroscience in the Johns Hopkins School of Medicine and the study's lead researcher, the findings demonstrate that "persistent pain doesn't always originate in the brain, as some had believed, which is important information for designing less addictive drugs to fight it."

Dong's research focused on a system of pain-sensing nerves within the faces of mice, known collectively as the trigeminal nerve. This nerve has three major branches: the ophthalmic nerve (V1), the maxillary nerve (V2), and the mandibular nerve (V3). These three branches carry sensory information from your face to your brain, via the spinal cord. (If you want to learn more about all that stuff, here you go.)

Dong discovered that when he pinched the V2 branch of the trigeminal nerve, both the V2 and V3 territories were extra-sensitive to additional pain. Meaning the pain spread from the location of injury to other places. What this suggests is that nerves that don't normally respond to pain can modify themselves during prolonged injury, adding to the pain signals being sent to the brain.

Dong was curious about TRPV1, the protein needed to activate pain-sensing nerve cells, so he looked at its activity in the trigeminal nerve. What he found was that TRPV1 was hyperactive in both injured V2 nerve branches and in uninjured V3 branches, as well as in the branches that extended beyond the trigeminal nerve cell and into the spinal cord.

Aware that serotonin is involved in chronic pain, researchers at the University of Maryland investigated its role in TRPV1 activation. The team, led by Feng Wei, blocked the production of serotonin, and found that TRPV1 hyperactivity nearly disappeared.

"Chronic pain seems to cause serotonin to be released by the brain into the spinal cord," Dong says. "There, it acts on the trigeminal nerve at large, making TRPV1 hyperactive throughout its branches, even causing some non-pain-sensing nerve cells to start responding to pain. Hyperactive TRPV1 causes the nerves to fire more frequently, sending additional pain signals to the brain."