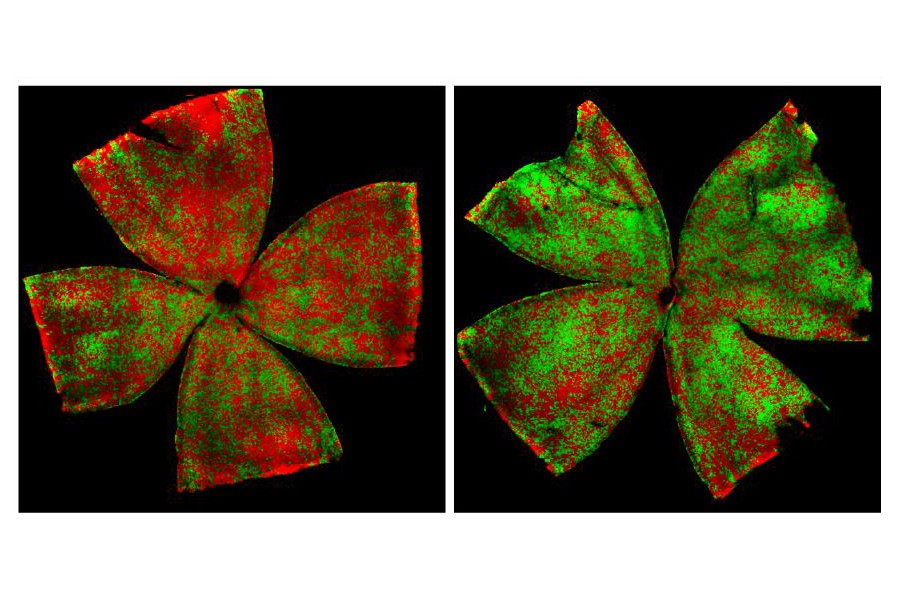 Image caption: Differences in X chromosome silencing can greatly affect the same organ on different sides of the body. Shown are the left and right retinas from a single mouse. Cells are red or green depending on whether they have inactivated their maternal or paternal X chromosome, respectively. 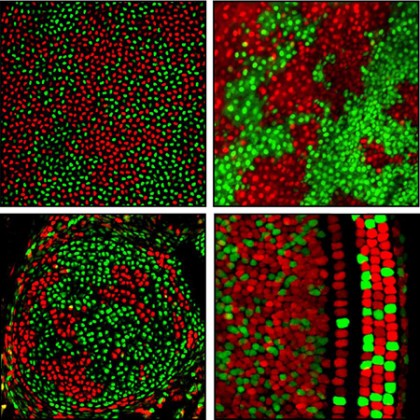 Image caption: Patterns of X chromosome silencing in cells of the cornea, skin, cartilage and inner ear of mice (clockwise). Cells are red or green depending on whether they have inactivated their maternal or paternal X chromosome, respectively.

In their efforts to study the genetic diversity of female mice in a more detailed way, researchers at the Johns Hopkins University School of Medicine have found a way to color-code cells and determine which of the two X chromosomes is inactive. The red and green images are the cell scans of these mice.

The researchers' work was recently published by the journal Neuron.

Need a refresher in chromosome stuff? Here you go.

In males, the nucleus of every cell contains both an X and Y chromosome. Females, however, carry two Xs: one from dad, one from mom. But although every cell of a female's body contains two Xs, only one of the two Xs works to determine inherited traits. Early on in the development of most mammals, each of a female embryo's cells makes a "decision" to inactivate one of the two X chromosomes. The choice of which X chromosome to render inactive appears to be random, but once those cells divide, their descendants maintain that initial decision.

Although scientists have known about the inactivation process for over 50 years, "it couldn't be clearly visualized in internal organs and tissues until now," explains Jeremy Nathans, professor of molecular biology and genetics at Johns Hopkins.

The color-coding technique used by Hopkins researchers, says Nathans, is likely to be valuable for many studies, and especially for research into relatively common X-linked variations, such as hemophilia or color blindness. It may also prove useful, he says, "for looking at the role that this process plays in brain development, including the ways that it contributes to differences between the left and right sides of the female brain, and to differences in brain structure between males and females and among different females, including identical twins."