While some medical experts consider them to be dead, Marlise Munoz and Jahi McMath are both currently being kept alive by technology.

McMath, a 13-year-old girl from California, is being kept alive to honor the wishes of her family, which acts as her surrogate. But for the doctors of 33-year-old Munoz, the case is complicated by her pregnancy. Although her husband has expressed Munoz's wishes to not be sustained by medical technology, Texas law requires that her body be kept alive to support the life of her unborn child.

According to a piece in The New York Times, "Texas is one of more than two dozen states that prohibit, with varying degrees of strictness, medical officials from cutting off life support to a pregnant patient."

With Munoz, there are two lives at stake: hers and that of her unborn child.

Here's where the issue gets thornier. Because she is pregnant, Munoz's wishes, and the wishes of her family, are overruled by state law. This raises a number of difficult questions, Rushton says.

Do Munoz's preferences become nullified because she is pregnant? Should Mr. Munoz's request that his wife be allowed to die in a way that is consistent with her wishes be disregarded?

What is the ethical justification of mandating continued treatment that is contrary to the patient's and surrogate's wishes? Does the fetus become a ward of the state and the woman's body merely a biologic incubator for the fetus?

There are "significant unknowns" in this particular case, as Rushton notes. For instance, even if the life of fetus is sustained "to the point of viability, complications resulting from dependence on technology, severe disabilities, or premature death are quite possible."

Further complicating the issue is the question of the health care providers' own sense of morality. If the first principle of medicine is to do no harm, what happens when doctors and nurses are forced to treat a patient against her will? "When doctors and nurses begin to view their actions as causing physical, emotional, or spiritual harms to their patients, it causes them moral distress," Rushton writes. "They begin to wonder: How can I see myself as a good doctor or nurse when I am participating in actions that I perceive as wrong or ethically unjustified? The result is that clinicians can burn out. They become cynical, detached, or numb."

As Rushton reminds us, "There are no easy answers," either in Munoz's particular case, or others like it. Following Rushton's lead, health care practitioners—and really, all of us—must continue to "engage our communities about the boundaries of using technology" in medical settings. 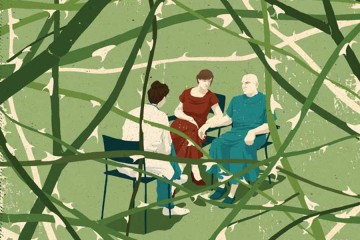 Addressing the nature of suffering

Published Winter 2013
Palliative care addresses what curative treatment may not: pain, anxiety, and the reluctance to talk about dying. / Johns Hopkins Magazine