She has dedicated her studies to the plight of displaced persons

Anna Wherry, a Johns Hopkins University senior from Frederick, Md., who has dedicated her studies to the plight of displaced persons, has won a Marshall Scholarship, a prestigious award designed to enable future leaders to study in the United Kingdom. 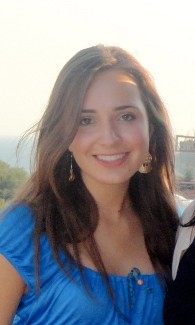 The 21-year-old, who is double majoring in public health and anthropology, is one of 34 students chosen from the United States for the scholarship. She will enroll in Oxford University's Refugee and Forced Migration Studies program and also pursue a master's degree in social anthropology from the University of Edinburgh.

Understanding displacement became personally important to Wherry after her family adopted a sister and brother from Colombia. Earlier this year, as part of a Johns Hopkins Woodrow Wilson Fellowship, she traveled to Bogotá, Colombia, where she worked with human rights lawyers, public officials, and displaced people while researching Colombia's first law providing reparations for victims of the armed conflict.

According to Wherry, Colombia has the world's largest population of internally displaced persons.

Describing the experience in her scholarship application, she wrote, "I carefully built relationships with public officials implementing the law, gained the trust of individuals categorized as victims, and learned from human rights lawyers who themselves have been threatened and displaced. I have even participated in closed meetings on the development of the law in Bogotá."

She told the scholarship committee that her family inspired her to learn from their experiences and attempt to fight for policies to improve the situations of those in similar circumstances worldwide. Wherry is currently interning at the Brookings Institution, researching displacement.

"What continually makes me marvel in my mentoring of Anna is her intense curiosity, her acuteness of intellect, and her real sense of responsibility in her scholarship," says Clara Han, an assistant professor of anthropology in the university's Krieger School of Arts and Sciences. "She has passionately pursued her study of the Victims Law in Colombia, thriving in and contributing to an environment of cutting-edge research in our department."

Since her freshman year, Wherry has volunteered with Health Leads, working with the underserved as a patient advocate at Johns Hopkins Bayview Medical Center. In high school, she established the Karesa Bari Community Garden with members of the Bhutanese refugee community, a project on which she continued to work during her time at Johns Hopkins by helping to secure $7,000 in grants for its expansion.

In addition to having been awarded one of the university's competitive Woodrow Wilson Undergraduate Research Fellowships, which she is using to conduct a four-year project researching displacement in Colombia, Wherry in 2012 won a Global Health Established Field Placement Award to research cigarette smuggling in South Africa.

The British government funds the Marshall Scholarships to commemorate the Marshall Plan, the U.S. government program that assisted in the reconstruction of Europe after World War II. Each year the awards give up to 40 American students an opportunity to study at any British university. The scholarship pays university fees and living expenses, as well as travel fare to and from the United States. It is typically a two-year grant, with the possibility of a third year. Recipients must be U.S. citizens no older than 25 with a cumulative grade point average of 3.70 after freshman year.

"The scholarship is a great opportunity," Wherry said. "I will be able to further explore my interests in anthropology, policy, and issues of displacement. I especially look forward to working with anthropologists at Oxford and Edinburgh whose works I have read as part of my independent research. Forming relationships with these scholars and institutions will hopefully assist future collaborations on research when I return to the U.S. It is also an incredible honor to join the community of Marshalls, who I will certainly learn from as well."