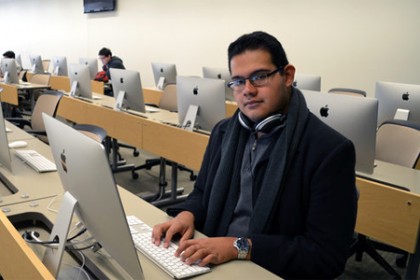 Alvarez is currently a senior at Johns Hopkins University—but if he had listened to his counselor's advice, he'd still be back home in Long Island.

Alvarez recently talked with Marketplace about his unique "path to an elite university." He was born to two immigrants from El Salvador: his mother is a housekeeper, his father is a retired mechanic. Alvarez knew he wanted to be a doctor, but figured he'd have to settle for a low-cost college close to home.

His History teacher suggested he consider Johns Hopkins—that was the first time Alvarez heard about the school. He applied to Hopkins and to a local college, and got into both. Ultimately he decided on Hopkins because, although the sticker price was more expensive than the New York school, with grants and scholarships, Johns Hopkins turned out to be affordable for him.

The Alvarez's family visit to the JHU campus marked George's first time out of New York. "I was intimidated," he told Marketplace. During his first months of school, he felt as though his classmates were "better than" him, even though he was a straight-A student all through high school.

Looking back on his counselor's advice—Hopkins is "not a good fit for you, you're going to be alone"—George thinks his counselor was trying to protect him. More, from Marketplace:

Hoxby's research on so-called "under-matched" students has shaken up the college admissions world this year. She says most low-income, high achieving seniors don't even apply to the Harvards and Macalesters and UCLAs of the world—even though they tend to fare much better at highly selective colleges.

And they're more likely to land better jobs, with higher pay. Hoxby says if you're qualified to go to a top college and don't, "our minimum estimate is that you're giving up half a million dollars over your lifetime in net present dollars."

Hoxby says sometimes all it takes is the right information. She's been working with the College Board to send out customized packets to top, low-income students comparing financial aid and graduation rates at various colleges. Johns Hopkins is part of the effort.

Alvarez's story is almost accidental—he accidentally had a high school history teacher who accidentally suggested he apply to Johns Hopkins. Hoxby and the colleges taking her research seriously are trying to get these same "accidental" results on purpose. The more data that become available on low-income students, the better equipped universities will be at reaching out to these students and their families.

Alvarez graduates in the spring with a biophysics degree. He plans on applying to medical school after that. In the meantime, he's a leader in JHU's Office of Multicultural Affairs. He acts as a mentor to other underrepresented students with similar ambitions.