Visiting Wesley drove 82 yards in 31 seconds in the final minute of play to score the decisive touchdown and stun previously unbeaten Johns Hopkins 29-24 in an NCAA Division III football playoff game at Homewood Field on Saturday.

The Blue Jays (10-1) rallied from 23-14 down to take a 24-23 lead with 50 seconds left when senior Daniel Wodicka hauled in a 10-yard scoring pass from quarterback Robbie Matey. But Wolverines QB Joe Callahan found Steve Koudossou for completions of 36, 13, and 13 yards on the ensuing possession to claim the win. Koudossou finished with 11 catches for 132 yards and three scores for Wesley (9-2).

Stuart Walters ran for 97 yards and a touchdown for Johns Hopkins, which was making its third consecutive playoff appearance and fourth in five years. Keith Corliss had eight tackles to pace JHU's defense, which limited the Wolverines to 311 total yards. 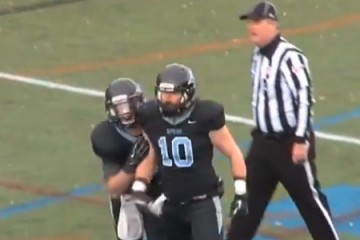