Junior Hannah Kronick broke a scoreless tie with a goal in the second overtime period, lifting the Johns Hopkins women's soccer team to a 1-0 win against York (Pa.) in the second round of the NCAA tournament at Homewood Field on Sunday.

Kronick's game-winner, a left-footed score in the 106th minute, put the Blue Jays (20-1-1) through to the NCAA round of 16 for the sixth consecutive season. JHU, ranked sixth nationally, will face No. 17 Williams (14-3-2) on Saturday in Middlebury, Vt. Host Middlebury, ranked No. 13, faces No. 10 Misericordia, with the winners squaring off Sunday for the right to advance to the national semifinals.

"So much relief in getting this victory," said Kronick. "It was pretty unfortunate we had to go to overtime, but I think it was a test of character for us. I think we really prevailed through it and to come up that big at the end of overtime was a great feeling. It showed how hard we worked all game to finally get that in the end."

The Blue held a 19-14 edge in shots, but Kronick had a shot go off the crossbar late in regulation, and Christina Convey had a shot deflect off the post.

The Spartans (13-5-3) had several scoring chances but could not convert, as Johns Hopkins goalkeeper Kelly Leddy made seven saves. 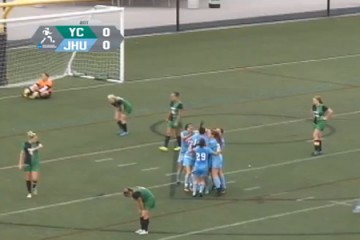