Imagine not knowing your name until you were nearly 100 years old. 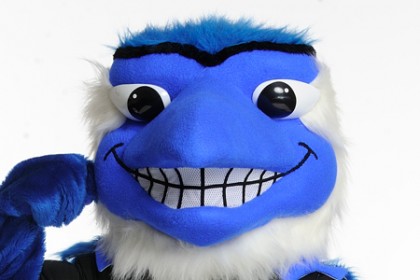 Our Blue Jay mascot doesn't have to wonder—for him, a nameless existence was his lot in life until Nov. 2, when he was officially dubbed "Jay" after a survey of the Johns Hopkins community.

More than 2,000 votes were cast to end to Jay's identity crisis. The Department of Athletics and the Office of the Dean of Student Life launched a contest in mid-October and fielded ideas for about a week, netting hundreds of overlapping suggestions. Then it was time for a vote among six possible names, including familiar Johns Hopkins monikers like Gilman (or Gil, for short) and Milton, as well as Bruiser (think black and blue), J. Hugh (a riff on JHU), and the clear winner, Jay. The name was officially unveiled on Nov. 2 during a home football game against Ursinus. A random drawing from the people who picked Jay resulted in sophomore Gigi Cabello winning a Hopkins t-shirt quilt from the book store.

It should be noted that nothing, from being nameless to the hoopla surrounding his name day, seemed to faze Jay. As always, the bird remained unflappable.