Johns Hopkins University senior John Arena has been named to the 2013 National Football Foundation Scholar-Athlete Class, the first JHU football player selected for the prestigious honor since its inception in 1959. The award includes an $18,000 postgraduate scholarship. 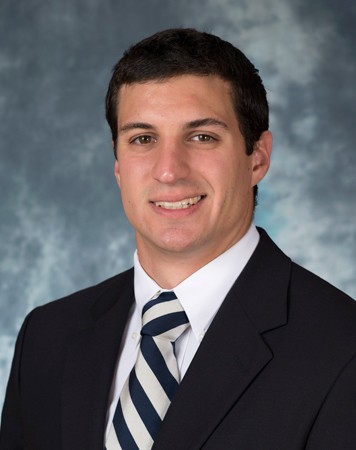 Arena is one of just 16 college football players from across the nation—and one of just two from an NCAA Division III school—named to the team. He is also the first Centennial Conference player ever selected.

The team was announced today by NFF President and CEO Steven J. Hatchell, who noted that the average grade point average of the 16 players selected is 3.79.

"These young men have a discernible and unrelenting commitment to excellence in the classroom as well as on the field," Hatchell said. "This class represents all that is right about college football, and the members serve as living examples of our mission to build leaders through football."

Arena, a strong safety, carries a 4.0 cumulative GPA and will graduate in December with a degree in neuroscience. He currently serves as a research assistant in the Johns Hopkins Division of Neuropathology and also completed a clinical practicum and neuroprotection research at the Movement Disorder Clinic at Johns Hopkins Hospital. Arena recently scored a 40 on the Medical College Admission Test (MCAT), which ranks him in the 99.6–99.8 percentile among all test takers. He plans to enroll in medical school next fall.

On the field, Arena is a co-captain for 10th-ranked Johns Hopkins, which currently boasts a 7-0 record and leads the Centennial Conference with a 6-0 league mark. He ranks third on the team with 28 tackles and four sacks and is a leader of a unit that ranks 13th nationally among DIII teams in scoring defense.

Each member of the 2013 National Scholar-Athlete Class will travel to New York City to be honored Dec. 10 during the 56th annual NFF Awards Dinner at the Waldorf-Astoria. One player will be named the 24th recipient of the William V. Campbell Trophy, which recognizes an individual as the most outstanding scholar-athlete in the nation. The recipient of that award will be announced at the Dec. 10 event. 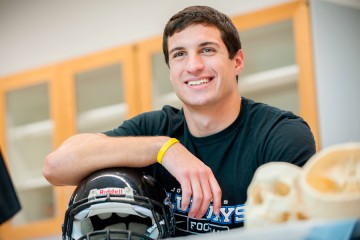 A head for the game