Texas energy entrepreneur and financier T. Boone Pickens plans to give $20 million to The Johns Hopkins University to support daring but potentially vision-saving research at the university's Wilmer Eye Institute. 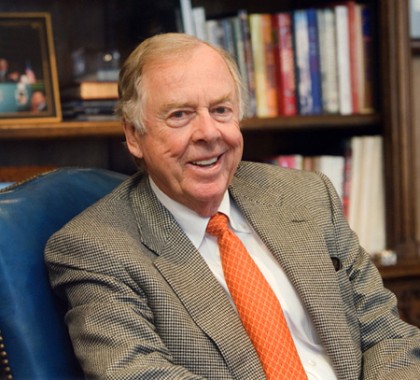 Pickens, founder of Mesa Petroleum and, at 85, the still-active chairman of BP Capital Management L.P., has said publicly that he has been treated at Wilmer for cataracts and for macular degeneration.

The latter condition also afflicted his father, who was legally blind by the time he reached Pickens' age. Pickens has discussed receiving new macular degeneration treatments developed in just the past decade that preserved his eyesight. He says his vision is now 20/40 or better, a level at which people can continue to read and see details on a computer screen.

"I'm doing pretty good," Pickens said. "When I have a problem—and I do have an eye problem and all—I find the best, and that was Wilmer. It's part of Johns Hopkins. ... It's the best in ophthalmology, the best school, the best hospital, [and] the best doctors of any other ophthalmology group anywhere in the world."

Pickens said his gift is included in his estate and will create an endowment to fund a T. Boone Pickens Scholars program, supporting clinician-scientists with promising but innovative ideas for new research avenues.

"What this gift will do," said Peter McDonnell, the William Holland Wilmer Professor of Ophthalmology at Johns Hopkins and director of the institute, "is allow us to scour the globe, not just the United States, to find the best and brightest young minds, bring them here as Boone Pickens Scholars, [and] invest in them the resources that will allow them to explore that brilliant idea that, if it pans out, is going to be a game changer."

"Funding for very, very novel and innovative research has always been very difficult," said Paul Rothman, dean of the Johns Hopkins School of Medicine and CEO of Johns Hopkins Medicine. "Now, with cutbacks in federal funding, gifts like that of Boone Pickens are really essential for us to move forward impactful research that otherwise is not going to get funded."

When complete, the Pickens bequest will bring his support of Wilmer to more than $28 million. He established the Boone Pickens Professorship in Ophthalmology in 2005 and later contributed $6 million to construction of the institute's Robert H. and Clarice Smith Building, which opened in 2009.

Ronald J. Daniels, president of the university, said Johns Hopkins is grateful for support from Pickens, whose approach is, he said, akin to the university's own.

"Boone Pickens is known as a real maverick, someone who has made bold moves to achieve large success," Daniels said. "So, too, is Hopkins known as an institution that undertakes innovative research to tackle some of society's most daunting challenges."

Pickens said he has had a relationship with Wilmer since meeting Walter Stark, an ophthalmologist and now the Boone Pickens Professor, during a hunting trip in Louisiana about 30 years ago. Both men are originally from Oklahoma, and they became friends. Pickens brought his father to Wilmer for evaluation, but the state of knowledge at the time was such that nothing could be done to stop the deterioration of the elder Pickens' eyesight.

In the past five years, says Neil M. Bressler, the James P. Gills Professor of Ophthalmology and director of Wilmer's Retina Division, new injection treatments have enabled Wilmer doctors to prevent blindness in about 90 percent of macular degeneration cases. Pickens says he hopes his gift will jumpstart progress in the fight against other eye conditions.

"It's going to help people for the next 100 years," Pickens said. "They're going to come up with some good ideas that will be developed and we will have great results from that. It's great to know you're able to make such a positive contribution to medical research for generations to come. 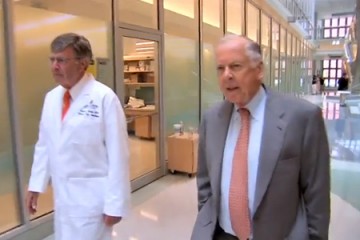