When the cameras start rolling, and the Nurse Jackies or Meredith Greys of television approach a patient's bedside, what determines their actions? How can the show's writers ensure the episode is not only entertaining, but medically accurate? 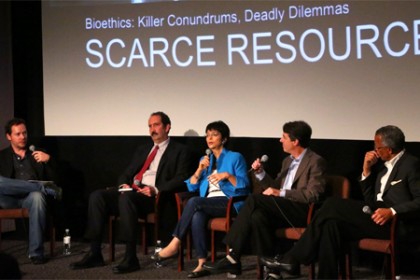 A group of Johns Hopkins bioethicists traveled to Hollywood earlier this month to talk to producers, writers, and directors about the ethics of everything from vaccinations to genetic engineering. The Science and Entertainment Exchange, a project of the National Academy of Sciences, hosted the discussion.

One of the bioethicists who made the trip, Ruth Faden, director of JHU's Berman Institute of Bioethics, tells the NPR blog Shots that similar exchanges have happened behind the scenes since 2008.

"Every time we've had an epidemic-based movie, we've had an opportunity to have a public discussion about the ethics of how we ought to respond—the limits of what is possible and what principles we should be using to allocate the resources we do have," she tells Shots.

Jeffrey Kahn, deputy director for bioethics and public policy at the Berman Institute, also made the trip, as did Michael Miller, director of the Center for Imaging Science at Johns Hopkins University Whiting School of Engineering.