NASA's Voyager 1 spacecraft officially has become the first human-made object to leave the solar system and venture into interstellar space, scientists confirmed yesterday. The 36-year-old probe, which launched in 1977, is about 12 billion miles from our sun.

New data indicate Voyager 1 has been traveling for about one year through the plasma, or ionized gas, present in the space between the stars and is in a transitional region immediately outside the solar bubble.

A report on the new observations is published this week in the journal Science. The Voyager team includes scientists from the Johns Hopkins University Applied Physics Laboratory.

"It's like the first time a satellite [Sputnik] went beyond Earth's atmosphere to an altitude of some 600 miles,said APL's Tom Krimigis, principal investigator for Voyager's Low-Energy Charged Particle (LECP) instrument. "Voyager is now leaving the solar bubble at an altitude of 11.3 billion miles. It's another historic milestone."

Added Ed Stone, Voyager project scientist based at the California Institute of Technology in Pasadena: "Now that we have new, key data, we believe this is humankind's historic leap into interstellar space. The Voyager team needed time to analyze those observations and make sense of them. But we can now answer the question we've all been asking: 'Are we there yet?' Yes, we are."

Voyager 1 first detected the pressure of interstellar space on the heliosphere, the bubble of charged particles surrounding the sun that reaches far beyond the outer planes, in 2004. Scientists then ramped up their search for evidence of the spacecraft's interstellar arrival, knowing the data analysis and interpretation could take months or years. Until mid-2010, the intensity of particles originating from inside our solar system had been holding steady. But in 2011 the intensity of those energetic particles (measured by the LECP instrument) began declining, as though they were leaking into interstellar space, and the radial expansion velocity of the solar wind went to zero.

Readings over the past year showed that solar particles had essentially all left and galactic particle intensities increased dramatically, said Matthew Hill, an LECP team member and space physicist at APL. "I remember saying then that if we had to decide based only on our LECP observations, we would say we crossed the heliopause last summer."

But without a plasma sensor that could regularly measure the density, temperature, and speed of plasma, Voyager scientists looked to the magnetic field, which didn't change direction at all, seemingly indicating that the intrepid probe remained in the solar magnetic field. That changed when an unexpected gift from the sun allowed Voyager 1 to make measurements of its plasma environment. A coronal mass ejection—or a massive burst of solar wind and magnetic fields—that erupted from the sun in March 2012 provided scientists with the data they needed. When the material eventually arrived at Voyager 1's location 13 months later, in April 2013, the plasma around the spacecraft began to vibrate like a violin string. On April 9, Voyager 1's plasma wave instrument detected the movement.

The particular oscillations meant the spacecraft was bathed in plasma more than 40 times denser than what it had encountered in the outer layer of the heliosphere. Density of this sort is to be expected in interstellar space.

"We literally jumped out of our seats when we saw these oscillations in our data—they showed us that the spacecraft was in an entirely new region, comparable to what was expected in interstellar space, and totally different than in the solar bubble," said Don Gurnett, leader of Voyager's plasma wave science team at the University of Iowa. "Clearly we had passed through the heliopause, which is the long-hypothesized boundary between the solar plasma and the interstellar plasma."

The scant evidence of solar influence that remains in Voyager's path just adds to the appeal of this mysterious region.

"While our data has been consistent with a clear separation of solar and galactic plasmas, we are not in pristine interstellar space as long as the cosmic rays are not equally distributed around the sky," Krimigis said. "Perhaps we may arrive in the undisturbed galactic medium in the future, but we are not there yet. That's why Voyager observations are so exciting; we are in uncharted territory and we continue to be surprised every day." 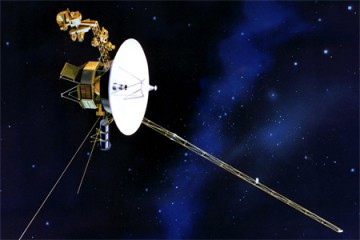