The Johns Hopkins women's soccer team rallied from a two-goal deficit on Wednesday to defeat host Carnegie Mellon 3-2 in the final game of the DoubleTree Tartan Cup in Pittsburgh, Pa., on Sunday, giving the Blue jays their second victory in five days against a team ranked among the top five nationally in Division III.

Senior Pamela Vranis converted a penalty kick in the 56th minute to put No. 7 JHU (5-0) in front to stay. The Tartans (1-1-1), who entered the content ranked No. 5 in the country, started fast with two goals in the first 24 minutes, but Johns Hopkins rallied to even the score before halftime on goals by Hannah Kronick and Christina Convey.

The victory came a day after a 2-1 win against Allegheny in JHU's opening match of the Tartan Cup—junior Sydney Teng and senior Kelly Baker scored for the Blue Jays in that win—and five days after a 2-1 win against Messiah, the top-ranked women's soccer team in Division III and winner of four of the past five national championships.

Johns Hopkins (5-0) returns to Homewood Field on Wednesday to face Stevenson at 7 p.m. 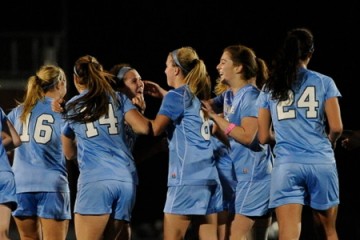