The Johns Hopkins University School of Education had an unlikely graduate in 2013, The Huffington Post reported Thursday. 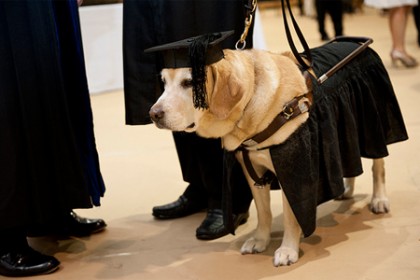 When Carlos Mora received his Masters of Science in Counseling, his service dog, Kirsch, was awarded an honorary degree for having attended all of his owner's classes. Kirsch wore a cap and gown as he walked across the stage with the graduates.

HuffPost has many more pictures, including shots of Mora and Kirsch with School of Education Dean David Andrews and commencement speaker (and JHU graduate) Wes Moore.