Long before he became the dark lord Darth Vader, Anakin Skywalker grew up in the small, fictional desert city of Mos Espa, a spaceport on the planet Tatooine. According to a Johns Hopkins researcher, Skywalker's boyhood home could soon be wiped off the imaginary map by a real-world phantom menace—a giant sand dune that is moving swiftly (for a sand dune, anyway) across the desert. 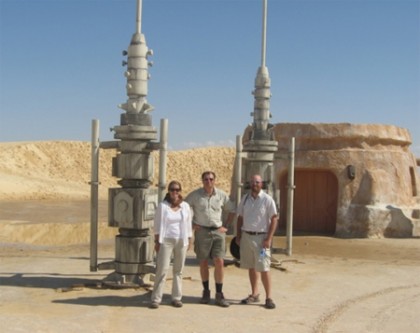 Image caption: Ralph Lorenz (center) with colleagues at the Mos Espa site in Tunisia in 2009.

The Mos Espa set featured in Star Wars Episode I: The Phantom Menace is threatened by a massive, moving crescent of sand known as a barchan, according to Ralph Lorenz of the Johns Hopkins Applied Physics Laboratory, who authored an article for The Planetary Society. The set, located in Tunisia, was used for filming of Episode I in 1997. A similar, small set used in 1977's Star Wars Episode 4: A New Hope was overcome by dunes decades ago, Lorenz writes.

More, from The (U.K.) Independent:

The film set is a major tourist site in Tunisia, with thousands of fans making the pilgrimage each year via the nearby oasis town of Tozeur to see the childhood home of the future Darth Vader.

Scientists have been observing the fate of the city from space for some time, using it as a reference point in order to be able to compare the speed of sand dune migration on Earth to that of Mars, and Saturn's largest moon Titan.

The barchan is estimated to be moving at a rate of 15 metres a year, some 10 times faster than those on Mars, and tourism photos from this year—featured as an example of "geomorphologically-useful citizen science"—indicate that the front edge has already reached the first buildings on the outskirts of Mos Espa.

Adds Lorenz: "Even if the threatening barchan fizzles out as it meets the set, a larger, slower-moving barchan is lumbering behind it."

To borrow a line from Darth Vader: Don't underestimate the force (of dune migration).

Read more from The Independent 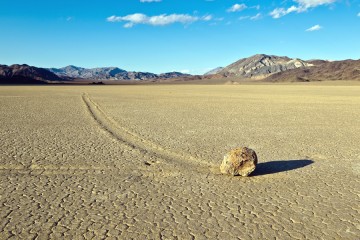