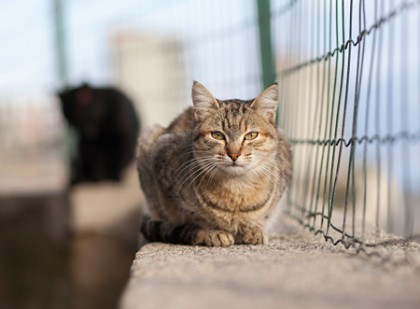 According to Robert H. Yolken, director of the Stanley Neurovirology Laboratory at Johns Hopkins School of Medicine, and E. Fuller Torrey, executive director of the Stanley Medical Research Institute in Chevy Chase, Md., cat poop can contain Toxoplasma gondii, a parasite known to pose a health risk to pregnant women and individuals with compromised immune systems, and possibly linked to brain infections and loss of cognitive function. They cite the growing cat population—perhaps more than 140 million in the U.S., including as many as 60 million feral cats, they told CNN in a recent interview—as a cause for concern.

CNN: How big of a risk are we talking about?

Torrey and Yolken: There are an estimated 82 million owned cats and another 25 million to 60 million feral cats in the United States, and their numbers have increased markedly in recent years. Based on studies done in California, it is estimated that these cats deposit 1.2 million tons of cat poop into the environment each year. At any given time, approximately 1% of cats are infected with Toxoplasma gondii.

The infective form of Toxoplasma gondii deposited in cat poop are called oocysts; a single infected cat can deposit millions of oocysts, each of which may survive in moist soil for 18 months or longer. It's thought that it only takes one oocyst to infect a human, which is concerning.