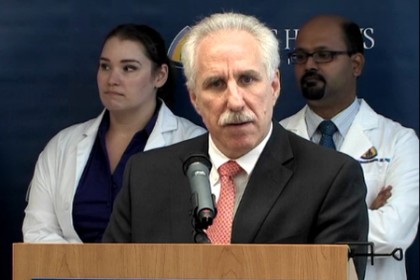 Image caption: Paul B. Rothman, dean of the medical faculty and CEO of Johns Hopkins Medicine

The full news conference can be viewed at hopkinsmedicine.org.

Flanked by Johns Hopkins researchers from what Mikulski called "the breakthrough generation," the group gathered at The Charlotte R. Bloomberg Children's Center to speak out against large-scale reductions to the nation's research budget. Automatic budget cuts, known as "the sequester," have slowed or stopped many of the nation's key programs, including those in biomedical research. Cancer research and research in such areas as Alzheimer's disease, diabetes, HIV and neuroscience all have been affected by sequester-related cuts.

"This matters. Cuts have consequences," said Collins. "I live with this paradox every day: We are at a moment of unprecedented medical research opportunities. We have the chance of making breakthroughs across the board, with many different diseases, because of new insights and new technologies. And yet we are also at a time &hellip; of historic threat to support for those breakthroughs. What a strange situation."

According to Collins, the sequester meant that roughly 700 peer-reviewed grants—including more than a dozen at Johns Hopkins—did not get funded.

"Who knows which one of those grants might have been the next breakthrough in cancer?" Collins asked.

According to The Baltimore Sun, Rothman said Johns Hopkins, long a leading recipient of federal research dollars, has lost about $38 million in NIH grant funding. Hopkins Medicine has lost $70 million in federal funding of all types from the sequester, he said, leading to "dozens" of layoffs.