Julie A. Freischlag, director of the Department of Surgery at the Johns Hopkins University School of Medicine and surgeon-in-chief at The Johns Hopkins Hospital, has been elected the first female president of the Society for Vascular Surgery. 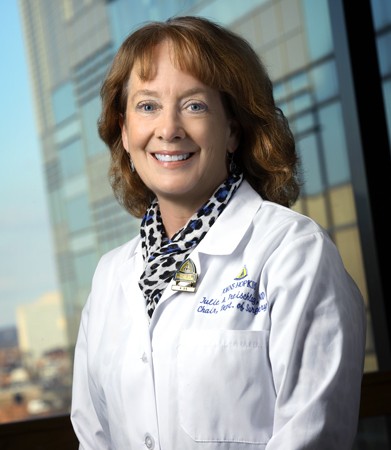 "I am humbled and delighted to be elected to this position in an organization as prestigious as the Society for Vascular Surgery," Freischlag said. "The society is dedicated to improving the care of our vascular patients, enhancing our knowledge of vascular diseases, and training the very best specialists to do both."

In addition, Bruce A. Perler, chief of the Division of Vascular Surgery and Endovascular Therapy at Johns Hopkins, was elected vice president of the society at its annual meeting earlier this month in San Francisco.

Freischlag has been at Johns Hopkins since 2003. She received her medical degree at Rush University Medical College in Chicago and previously served on the faculty at the Medical College of Wisconsin and the David Geffen School of Medicine at UCLA. She is the William Stewart Halsted Professor at Johns Hopkins as well as a surgeon at the Baltimore VA Medical Center and a trustee for the Robert Garrett Foundation at the Johns Hopkins Children's Center.

She has served as the principal investigator on several major studies, including the "Open vs. Endovascular Repair of Abdominal Aortic Aneurysms" trial. Freischlag's research interests lie in the treatment of abdominal aortic aneurysms and thoracic outlet syndrome.