A Johns Hopkins research fellow who is developing novel approaches to quickly identify bacterial DNA and human microRNA has won the prestigious $500,000 Burroughs Wellcome Fund Career Award at the Scientific Interfaces. The prize, distributed over the next five years, helps transition newly minted PhDs from postdoctoral work into their first faculty positions. 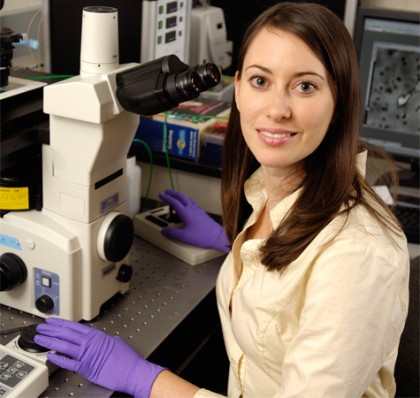 Stephanie Fraley is a postdoctoral fellow working with Samuel Yang at the Johns Hopkins School of Medicine and Jeff Wang, who has appointments in the Whiting School of Engineering and the medical school. The goal of her work is to develop engineering technologies that can diagnose and guide treatment of sepsis, a leading cause of death worldwide, and also lead to an improved understanding of how human cells and bacterial cells interact.

"Sepsis is an out-of-control immune response to infection," Fraley said. "We are developing tools that are single-molecule sensitive and can rapidly sort and detect bacterial and host response markers associated with sepsis. However, our devices are universal in that they can be applied to many other diseases."

Fraley is using lab-on-chip technology, also known as microfluidics, to overcome the challenges of identifying the specific genetic material of bacteria and immune cells. Her technology aims to sort the genetic material down to the level of individual sequences so that each can be quantified with single-molecule sensitivity.

"Bacterial DNA is on everything and contamination is everywhere, so trying to find the ones associated with sepsis is like the proverbial search for the needle in the haystack," Fraley said. "With microfluidics, we can separate out all the bacterial DNA, so instead of a needle in a haystack, we have just the needles."

Read more from Institute for Nanobiotechnology