Scientists have created the first global topographic map of Saturn's moon Titan, giving researchers a valuable tool for learning more about one of the most Earthlike and interesting worlds in the solar system. 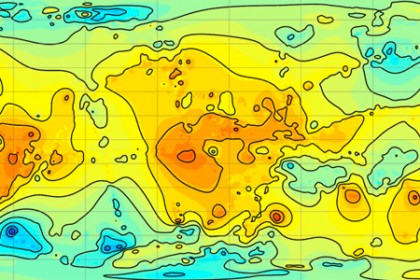 Titan is Saturn's largest moon—with a radius of about 1,600 miles, it's bigger than planet Mercury—and is the second-largest in the solar system. Scientists care about Titan because it's the only moon in the solar system known to have clouds, surface liquids, and a mysterious, thick atmosphere. The cold atmosphere is mostly nitrogen, like Earth's, but methane on Titan acts the way water vapor does on Earth, forming clouds and falling as rain and carving the surface with rivers. Organic chemicals, derived from methane, are present in Titan's atmosphere, lakes and rivers, and may offer clues about the origins of life.

The map, as well as a paper on the project, appear in the journal Icarus.

"Titan has so much interesting activity—like flowing liquids and moving sand dunes—but to understand these processes it's useful to know how the terrain slopes," says Ralph Lorenz, of the Johns Hopkins University Applied Physics Laboratory, who led the map-design team. "It's especially helpful to those studying hydrology and modeling Titan's climate and weather, who need to know whether there is high ground or low ground driving their models."

Titan's thick haze scatters light in ways that make it very hard for remote cameras to "see" landscape shapes and shadows, the usual approach to measuring topography on planetary bodies. Virtually all the data we have on Titan come from NASA's Saturn-orbiting Cassini spacecraft, which has flown past the moon nearly 100 times over the past decade. On many of those flybys, Cassini has used a radar imager, which can peer through the haze, and the radar data can be used to estimate the surface height.

"With this new topographic map, one of the most fascinating and dynamic worlds in our solar system now pops out in 3-D," says Steve Wall, the deputy lead of Cassini's radar team, based at NASA's Jet Propulsion Laboratory in Pasadena, Calif. "On Earth, rivers, volcanoes, and even weather are closely related to heights of surfaces—we're now eager to see what we can learn from them on Titan."