He was director General Internal Medicine division at School of Medicine

Frederick L. Brancati, an internationally recognized expert on the epidemiology and prevention of type 2 diabetes and longtime director of the Division of General Internal Medicine at the Johns Hopkins University School of Medicine, died Tuesday after a long struggle with amyotrophic lateral sclerosis (ALS). He was 53. 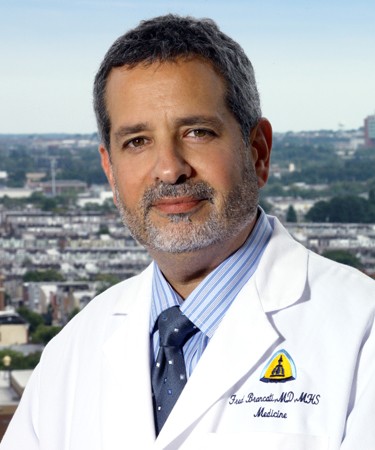 Brancati was a highly regarded teacher and mentor, having won numerous awards from medical students, graduate students, and postdoctoral students at Johns Hopkins. Last year, he was named a Distinguished Service Professor of Medicine by the Johns Hopkins University Board of Trustees, a high honor bestowed upon very few senior faculty members to recognize their exemplary service to the institution.

"He was a delightful human being—smart, witty, and fun to be around, " said Michael J. Klag, dean of the Johns Hopkins University Bloomberg School of Public Health, whom Brancati succeeded as division chief. "He could have been a stand-up comedian or an author along the lines of Bill Bryson. Luckily for Hopkins and the health of populations everywhere, he decided to do clinical research and become a mentor par excellence."

Colleagues say Brancati's research has had a profound impact on our understanding of the clinical epidemiology of type 2 diabetes and its complications. He was extraordinarily creative and employed observational and experimental methodologies to address an impressive array of issues related to the etiology, prevention, treatment, and consequences of type 2 diabetes. In the process, he fundamentally changed how clinicians and researchers view this chronic illness.

"Fred was a truly remarkable person," said Lawrence J. Appel, M.D., director of the Welch Center for Prevention, Epidemiology, and Clinical Research, a joint program of Johns Hopkins University's schools of public health and medicine. "To his colleagues, he was a brilliant scientist with a dazzling sense of humor. For the 200-plus faculty and staff in the Division of General Internal Medicine, he was an extremely supportive and effective leader. For his students and trainees, he was a superb mentor. In all roles, he was warm and compassionate. He deeply cared about people."

He arrived at Hopkins nearly 25 years ago, in 1989, for a general internal medicine postdoctoral fellowship, while he also earned a master's degree in clinical epidemiology from the Johns Hopkins Bloomberg School of Public Health. He joined the Department of Medicine faculty in 1992, was promoted to professor in 2003, and was named division director in 2004. During his tenure, the Division of General Internal Medicine grew to include 80 full-time faculty, 150 part-time faculty and 17 postdoctoral fellows, and received more than $30 million per year in NIH and other federal grants (up from $12 million per year).

Brancati is survived by his wife, Elizabeth M. Jaffee, an eminent cancer researcher, professor of oncology, and co-director of the Skip Viragh Center for Pancreas Cancer at the Johns Hopkins Kimmel Cancer Center; and 16-year-old twin daughters, Maddy and Franny. Other survivors include his sister, Mary Lee Saarbach, and his mother, Lee.