Back and to the left—after a half-century of news media coverage, the 889 pages of the Warren Commission report, endless popular media accounts, no shortage of conspiracy theories, and, well, Oliver Stone, those five words cling to the brain when thinking about the 26.6 seconds of home movie that Abraham Zapruder shot on the morning of Friday, Nov. 22, 1963. 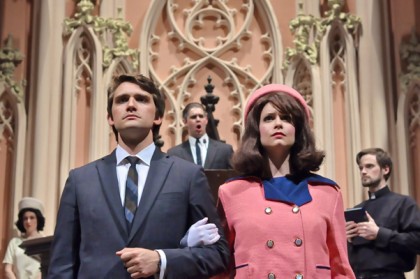 Zapuder's camera caught the motorcade of President John F. Kennedy as it travelled around Dallas' Dealey Plaza, turning left off of Houston Street onto Elm Street and passing by the Texas School Book Depository. The 486 frames that Zapruder filmed include footage of Texas governor John Connelly and onlooker James Tague being wounded by the gunfire that assassinated President Kennedy. In November 1966, Life magazine published select individual frames of Zapruder's footage, and there are few movies in the entire history of cinema that have been subjected to more frame-by-frame analysis.

That scrutiny is a microcosm of the past 50 years. We're all watching what's going on with the man of great importance in the backseat and almost forget about the woman in the pink suit who starts crawling across the car's trunk. "When we think of Jackie Kennedy we think of the pink pillbox hat and suit," says Caitlin Vincent, classical soprano and librettist. "Or we think the big glasses and the Andy Warhol Jackie O period, but at that point she already was an icon—untouchable, almost like a goddess on a pedestal. Jackie O is America, she's part of the myth of this country. And I feel like there are some very key points before that happened, when she was just the first lady or the senator's wife, and just the process she must have gone through to somehow keep it together when her husband had just been killed. I think few people would have had the strength to do that, and she was able to say, 'You can look to me. I know you are all broken, but I will be the beacon, the light for you.' And that's just fascinating to me."

It wasn't a passing fascination for Vincent, a Peabody Institute alumnus and current Peabody academic program coordinator. She founded the nimble, innovative opera company the Figaro Project in 2009 as a way to promote local performers and produce contemporary and lesser-known opera productions in accessible ways. The company has allowed her to work with composers to create original works, and she's reinterpreted such standard opera fare as The Marriage of Figaro and Don Giovanni into The Figaro Project, which debuted in 2010, and Who Killed Don Giovanni, which debuted last year.

Now Vincent and the Figaro Project's resident composer and Peabody graduate student Joshua Bornfield have collaborated to create Camelot Requiem, a powerful remembrance of the immediate aftermath of Kennedy's assassination as experienced by the people closest to him. Camelot Requiem debuts this Friday and Saturday, May 10 and 11, at First and Franklin Street Presbyterian Church at 7:30 p.m.

Camelot's two acts take place in waiting rooms, one at Parkland Memorial Hospital where Kennedy was taken following the shooting, and one at the Bethesda Naval Hospital in Maryland where the autopsy was performed 10 hours later. "I've always been really fascinated with what happens behind the scenes of the Kennedy assassination," Vincent says. "So much of history focuses on the grassy knoll and Jack Ruby and all that, but what always piqued my interest was this idea that you had JFK's personal staff, the family, and the Johnsons, and they were essentially stuck in these waiting rooms for 10 hours, waiting for the autopsy to be done. And we don't really know what happened behind those close doors. All we know is that when they emerged they were all collected and the country kept on going."

Certain specific events did take place during those 10 hours: Kennedy was read his last rites and presidential power was transferred to Lyndon B. Johnson. More elusively, during that time the 34-year-old Jacqueline Kennedy, who had lost her second son Patrick following an emergency caesarean section only three months earlier, became a widow. The Dallas visit was her first appearance at a political event in the United States outside of Washington, D.C., since her husband's 1960 presidential campaign. In a Nov. 23, 1963, New York Times article, reporter Marjorie Hunter noted that when the first lady moved into the White House in 1961, she said: "I feel as though I had just turned into a piece of public property. It's really frightening to lose your anonymity at 31."

That attention only amplified following her husband's death. Kennedy's use of popular media made him known as America's first TV president, but that mass reach also made his widow the country's first televised public mourner. That's a process that's become so common that entire daytime talk shows are devoted to it, but it's difficult to picture anybody having to navigate public image and private grief for an entire nation for the first time ever. "Can you imagine a grieving widow completely losing it—could we have been able to deal with [the assassination] as a country without how she handled it in public?" Vincent wonders. "We had to have her as a rock so that we could grieve, in a way."

This isn't the first opera to focus on Jackie Kennedy. In 1995 the Houston Grand Opera commissioned composer Michael Daugherty and poet and writer Wayne Koestenbaum to create Jackie O, which focuses more on her late 1960s life. Vincent and Bornfield tackle more difficult emotional terrain, which, for Vincent, is an important challenge for artists to contemplate.

"I think it's important for all arts to be a reflection of today's society, so even though this is about something that happened 50 years ago, Josh [Bornfield] and I were still informed by what's going on now, both in terms of the opera community and in the greater American situation," Vincent says. "No one in the cast remembers this—we're all too young, but it's such a pivotal point in our national identity. Even 50 years later, our parents can all remember exactly where they were. It's sort of the [September 11] for them. And 50 years ago, it's interesting to see what's changed, what hasn't changed, we're still having these moments of national tragedy—gun control, inequality—and I wanted to make a tribute to them. And it seemed like an opera was a fitting thing to do, given their support of the arts."

It's also a fitting enterprise for this energized, ambitious local opera company. Camelot Requiem is a fully staged production of 10 volunteer singers, six instrumentalists, a conductor, and a stage director, which has been working on this production since November (Vincent and Bornfield's writing process took place over about two years). The company put together four video trailers for the production, which can be viewed at Figaro Project's YouTube channel. And tickets to this world premiere are more than reasonable: $5 students, $15 general.

In short, it's a world debut of an original work featuring local performers that is perfectly aligned to the company's mission and ambitions. "I think there will always be a place for grand opera," Vincent says, citing major companies such as Houston, the New York Metropolitan Opera, and the Lyric Opera of Chicago as organizations that have the budget and staffs to mount epic, large-scale opera productions. But "I think that the future has to be in contemporary opera, and it's really the responsibility of regional and smaller companies to focus on, a) more obscure works from the standard canon, and b) really promoting contemporary opera," she says. "It doesn't have to cost $200,000 or $2 million to put on a show. You would be appalled to know how little money we have for this. But I think it's necessary. We didn't stop writing the novel just because there had already been great American novels written. We keep writing new ones and we continue to love them and respect them and read them in eighth-grade English class. But there's no future for the art if we don't have new writers and new books."