Have you had a chance to see any of the presentations on the university's new identity initiative? If not, now is your chance.

Vice President for Communications Glenn Bieler will host a live webinar open to the entire university community next week. The presentation will explain the initiative—which was launched last year—discuss the process behind it, and show the proposed designs and architecture.

The webinar will be held on Wednesday, April 24 from noon to 1 p.m. Those who wish to participate can sign up online in advance.

"So many members of our community—faculty, staff, students, trustees, and alumni—already have taken time out of their busy schedules to learn about this important initiative and offer their feedback," Bieler said. "The response has been tremendous, and we've received valuable insights, but we still want to reach out to others."

Bieler has given 34 presentations since January, traveling to seven campuses and reaching others by videoconference. Members of the identity committee, made up of communications professionals from around the university, also have shared the process and progress with their schools and divisions.

President Ronald J. Daniels announced the initiative in a universitywide email in November, saying "this endeavor will allow us to better leverage our strengths and even further enhance the Johns Hopkins name."

Bieler emphasizes the importance a collaborative process played in the identity development.

"All the feedback we've received—positive and negative—has helped to get us where we are today," he said.

One theme that emerged in emails and questions, he said, centered on the university seal and its relationship to the new identity. Bieler's message on this topic is clear: The seal isn't going anywhere.

"The seal has a place of special importance at Johns Hopkins, and it will continue to be used for those special purposes it was meant to be used for—presidential initiatives, diplomas, official documents," he said.

Additional information about the identity initiative can be found online at identity.jhu.edu. 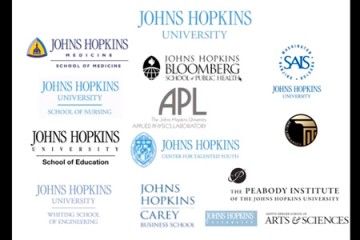 More on the identity initiative