The Johns Hopkins men's lacrosse team earned its biggest win of the season on Saturday, limiting top-ranked Maryland to four goals in a 7-4 victory in College Park, Md.

The No. 15 Blue Jays, who had lost three of their past four games coming into the contest, improved to 7-4 with the win and ended a two-game losing streak against the Terps (8-2). JHU leads the all-time series 69-40-1.

Johns Hopkins got two goals from senior John Ranagan in the opening 10 minutes to take a 2-0 lead and never trailed.

"This was an important game against what we think is the best team in the country right now," JHU coach Dave Pietramala said during the postgame news conference. "And [Ranagan] answered like a senior needed to answer in a game that I felt like was a lot about seniors. We all have a great respect for Maryland and we think those guys have done a phenomenal job. So to come out and get the first two goals of the game really set a great tone for our team."

Johns Kaestner also netted a pair of goals for the Blue Jays, and Lee Coppersmith, Rob Guida, Brandon Benn each scored once.

Maryland owned a 36-31 advantage in shots, but JHU goalkeeper Pierce Bassett made 12 saves, including five in a second quarter in which the Terps took 12 shots but failed to score. JHU led 4-2 at halftime, and Maryland never got closer than two goals the rest of the way.

"We talked about forcing their weak hands, taking away some of the things they like to do," Bassett said. "I thought the defense played really hard and they followed what we talked about the entire week, and that really helped me see the shots I was comfortable with, and all I really did was save them."

Johns Hopkins looks to strengthen its postseason case when it hosts Navy on Saturday at 4 p.m. 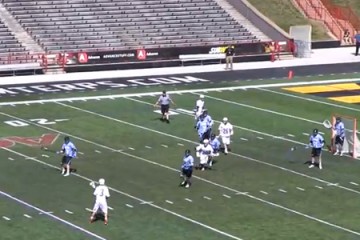