Cartoonist and graphic novelist Gilbert Hernandez will talk about his work on April 15 at The Johns Hopkins University. 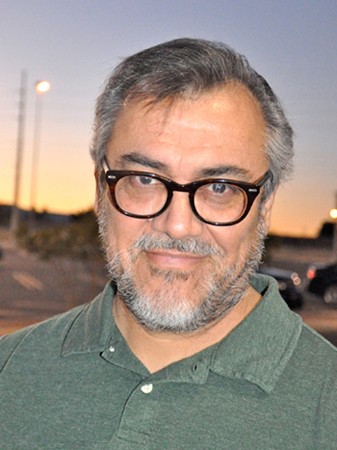 In 1981, along with his brothers Jaime and Mario, Hernandez created Love and Rockets, a landmark, award-winning comic book series informed by the L.A. hardcore punk rock scene. The long-running series' DIY ethic and compelling, multiracial female characters earned it a well-deserved spot in the pantheon of alternative comics. Love and Rockets also spawned the Palomar stories, Hernandez's magic realist magnum opus. Set in a fictional Central American border town, the vivid, diverse characters of "Heartbreak Soup" and "Human Diastrophism" prompted The New York Times to declare Hernandez "one of the great craftsmen of American comics."

Hernandez's current graphic novel, Marble Season, is a semi-autobiographical work set in a 1960s California suburb against the golden age of the American dream and the silver age of comics. It's a subtle, deft rumination on the redemptive and timeless power of storytelling and world-building in childhood.

Hernandez, 56, lives in Las Vegas with his wife and daughter. To download images of his work, go to: http://www.jhu.edu/~artwork/

Hernandez's talk, "From Funnybooks to Graphic Novels," will begin at 5:30 p.m. in Room 101 of the F. Ross Jones Building, Mattin Center, on the Homewood campus. A book-signing will follow.

The event, which is free and open to the public, is co-sponsored by Homewood Art Workshops and Homewood Arts Programs.