Non-native earthworms can do more harm than good to soil, according to new research from Johns Hopkins University's Department of Earth and Planetary Sciences and the Smithsonian Environmental Research Center (SERC). 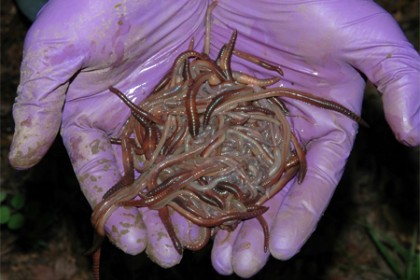 The study focused on one of the more than 20,000 orchid species, Goodyera pubescens, a tall, erect plant with white flowers common in America's East Coast forests. Scientists determined that earthworms reduce the plant's population numbers by ingesting their tiny seeds, which fall into the soil surrounding orchids when the plants flowers. As earthworms move through the dirt, they swallow the microscopic seeds, preventing germination by either killing the seeds or burying them too deep in the soil to access upper-level nutrients required for growth.

The research team, which included JHU's Katalin Szlavecz, determined that, by a conservative estimate, older forests (ranging in age from 120 to 150 years old) in the central Maryland research area would lose 49 percent of Goodyera orchid seeds to earthworm ingestion in a year, and younger forests (50 to 70 years old), where non-native earthworms flourish, would lose 68 percent.

These numbers do not suggest that earthworms are inherently bad for orchids. Native earthworms keep the plants' ecosystems in balance, and allow plenty of room for growth. But the unchecked introduction and proliferation of new earthworm species, for activities like gardening or fishing, has a dramatic effect that defies the conventional wisdom that earthworms always are great for soil health, according to Melissa McCormick, a SERC researcher who was part of the study.

"Certainly where earthworms belong, when they're in their correct system, they have a really major role in how the forest functions," McCormick said. "The problem is when you get different species in there that are functioning very differently. People need to be a little bit more aware of what species sort of belong here and which ones don't, and just be aware that they've having effects other than just how well your garden is doing. Yes, it's certainly great for your garden, but it's got a cost."