For the third year in a row the Johns Hopkins Office of Cultural Affairs brings the Stoop Storytelling Series to the East Baltimore campus. On Thursday, seven different people from the Johns Hopkins medicine and hospital community will step up to the microphone onstage at the Turner Auditorium, and with their seven minutes talk about their Hopkins experience. 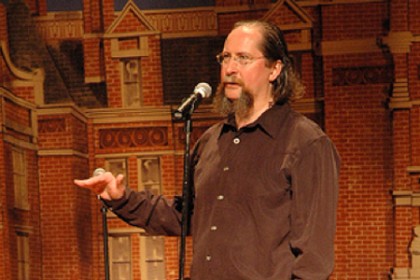 Image caption: Robert Montgomery, director of the Comprehensive Transplant Center at Johns Hopkins Hospital, presents during a Stoop Storytelling Series event in May 2012.

Baltimore-based writer Laura Wexler co-founded the series in 2006 with her co-producer and co-host Jessica Henkin, an educator, and over the years the series has given more than 450 people a chance a tell their story, whatever that story may be. In a phone interview, Wexler talked about storytelling at Johns Hopkins, what makes a good story, and seeing medical care through eyes of the people who provide it.

I think this is Stoop's third visit to Johns Hopkins. How and why did Stoop first come to Hopkins?

[Office of Cultural Affairs director] Shannon Dunn told a story in the first Stoop. The first show we ever did was about failure, and she told a story about not being able to learn how to ride a bike. And she was an early supporter of the Stoop and we had the idea, It would be great to come to Hopkins, for a couple of years before it actually happened. So we finally made it happened in 2010. It is one of my favorite Stoops because the stories are often quite literally about life and death. So the stakes are high and people are so passionate about what they do, so it's very compelling to listen to people.

The other reason I feel it's such a great event is that it feels a little bit like church in there because it feels like a community talking to itself. Everybody in the auditorium watching the show is usually connected with Hopkins in some way and it feels like this is a time when some of the different parts of this huge world can collectively talk to each other about what they do.

That's something I was going to ask about. Most of the Stoop events revolve around a theme: stories about failure, or fear, or the body ...

Yes, and we thought about—I think I know where you're going—we thought about having a more specific theme and in the end we decided that what makes more sense was to find as many different kinds of people as we could within the world of Hopkins and have them say, "This is my relationship to Hopkins, this is my Hopkins experience, this is who I am at Hopkins."

That makes sense, as Stoop at Hopkins is more stories about a place.

Yes, in a small way it's telling a story of this place. And what I'm most excited about for this show is we really have a variety of different voices. We have a patient, we have a customer service person—she's in her early 20s, she doesn't have a medical background but her job is to go in and talk to patients in the rooms and ask them how their experience is. And that's a fascinating story.

Does the framework of having stories about a place affect the approach in collecting storytellers, or are you looking for a variety of experiences in the situation itself?

It's more the variety of experiences and specialties. When you have a nurse, a doctor, and a patient, you know their experiences are going to be different. For our patient we got a guy who was being treated for testicular cancer and he's telling a story about what that was like. He was young at the time and right before he went under for the operation he signed this paper saying that he would participate in an experiment where a robot would come and see him the next morning. It's a funny story about signing the many forms you sign when you get operated on and, "Oh, here's one more—can the robot come see you tomorrow?"

The nurse tells a story about helping a child and a child's family to let go and for the child to die, just what it was like to be there and how meaningful the experience was for her. The way she tells this story, this child's death was transformative for her. I think that has been illuminating for me, to see how an individual case can become so memorable to a medical professional who sees so many cases.

In a way, this show is about humanism. Dr. Albert Chi, the trauma surgeon, he's telling a really personal story about being in a motorcycle accident and how that experience and what it was like to be treated as a patient led him to go into trauma surgery. Patrick Byrne, the plastic surgeon, he's grown an ear on somebody's arm and he's famous, but his story is about him as a person and why he loves the work he does. And he brings what he does down to a human scale and sometimes Hopkins doesn't seem to operate at a human scale. There's just something about this night that's really intimate.

Now that you've been doing this now for a number of years, is there any magic formula for recognizing what makes for a good Stoop story or storyteller? Or do you just know it when you hear it?

You want a story that matters to the storyteller, that isn't just a cocktail party anecdote where it's funny or weird or a coincidence but, in the end, not that meaningful to the storyteller. Whatever it is, I think if it's meaningful to the storyteller then it could be meaningful to the audience. And we're adamant that it has to be a personal story. It's not a lecture, it's not a reading, it's not a standup routine—although there's a med student in this show who does standup comedy. He's talking about his mishaps as a med student and we were just very clear with him that you don't want to get up onstage and tell jokes because even if you're jokes are funny they can't hold a candle to the power of the personal story. And we've seen that again and again. People don't want to hear jokes—they want to laugh, but they want to laugh because life is funny and strange and weird. So we have a couple of basic principles that we're pretty firm on and beyond that we're just looking for people who can tell some authentic story and offer a window into their life.

Given that these stories are personally meaningful, sometimes that can be a bit intense to be onstage talking about it. Have you developed any methods for calming people or reminding them how to keep going in those moments where it might feel a little bit overwhelming?

We've cried every year at the Hopkins show. [laughs] And this is going to sound kind of cheesy, but it's true—I think what we try to do is set a vibe or create a world in which it's OK to cry. You're not doing anything untoward or if you need to step away and take a breath or if it's hard for you, it's not weird. And I think when people see that someone up there—that it's costing them a lot to stand up and say what they're going to say, there's an incredible amount of sympathy that is created. There's so much support from the audience.

I have to say I never thought it would last this long. There's been a couple of times where I thought this might be on the downhill, but that doesn't seem to be the case—we had a show a few weeks back and sold out again. There will come a day when people are tired of this, but the one thing that we've done in contrast to other storytelling series around the nation is that we really are interested in getting new people every time. Some series have a core of people who tell stories a couple of times a year, or they have people who are more professional writers. We're less interested in a polished, perfect show than we are in trying to showcase as many different kinds of stories and people as possible. And maybe that's what people like—that it is different every time because the people are different.

That is something that I've always appreciated about Stoop, the diversity of voices and ideas, so to me it makes sense that it would come to Hopkins. Stoop is kind of telling stories about a city, and this place casts such a huge shadow across life in the city itself.