For the eleventh year in a row, a record-breaking number of people—20,613—applied for undergraduate admission to The Johns Hopkins University. The Class of 2017 had the most competitive regular decision applicant pool in the university's history, with 19,166 students submitting applications. Admit emails and envelopes went out to 2,934 high school seniors today. Along with the 530 early decision admits from the fall, this makes for an admitted class of 3,464. The university is seeking to fill a freshman class totaling 1,300.

Of those admitted to the class of 2017, 50 percent are women, maintaining the gender balance achieved in last year's admitted class. All 50 states are represented in the admitted class, with the students residing in 51 nations around the world. The average standardized test score for the admitted regular decision class is a combined 1472 on the two-part SAT scale.

Thirty-eight percent of admitted students have been offered need-based grant funding at Johns Hopkins, consistent with last year, reflecting the university's ongoing commitment to make a Johns Hopkins education accessible to students from all financial backgrounds. Students from the United States were evaluated without regard to their ability to pay tuition.

More information about decisions is available on the admissions FAQ web page. Students considering applying to Johns Hopkins can learn more at the admissions website and Hopkins Interactive. 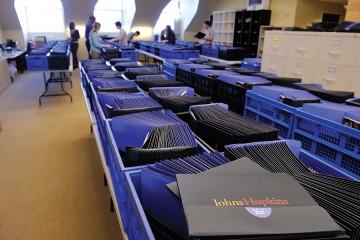 Published April 2013 Video
March and April are decision time in the Office for Undergraduate Admissions, an 'all hands on deck' crunch / Gazette