The Johns Hopkins men's lacrosse team used a dominant first half to put away Virginia in a 15-8 victory at the Face-Off Classic at M&T Bank Stadium on Saturday afternoon. 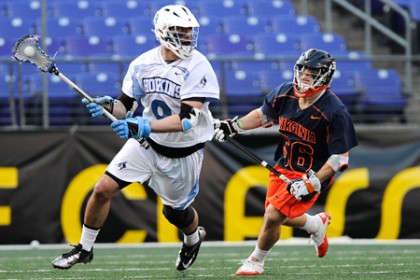 Image caption: JHU senior midfielder John Greeley had one assist in the Blue Jays' 15-8 win against Virginia in the Face-Off Classic.

The Blue Jays have won three straight against the Cavaliers and lead the all-time series 57-28-1.

JHU visits No. 12 North Carolina on Saturday at noon.