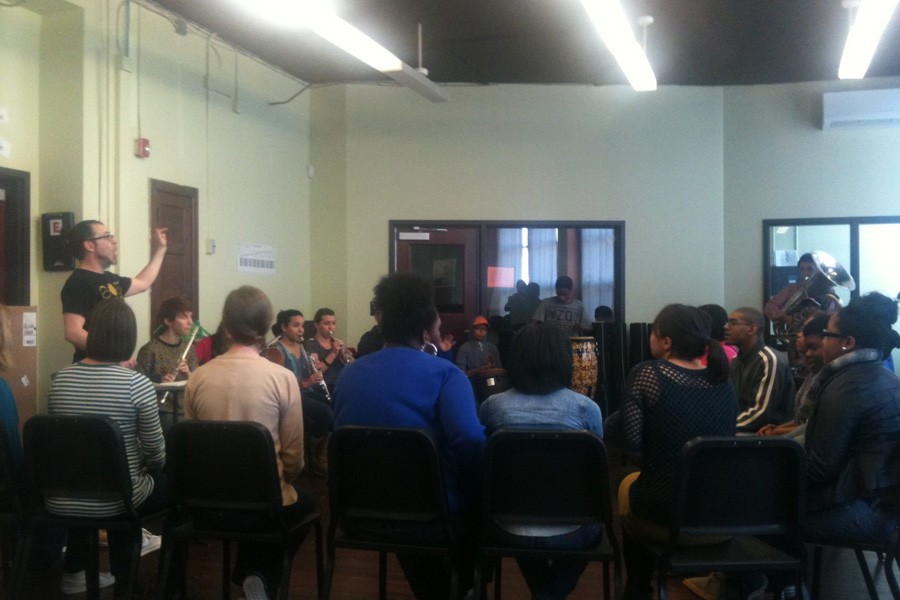 "Can everybody say that, 'Benjamin Britten?'" Jill Collier Warne asks the kids sitting in a circle on the floor of Peabody Institute's Griswold Hall. "He's a composer who was born 100 years ago. He's from England, and we're going to take some inspiration from him and his music for what we do."

It's Sunday, March 17, and Warne tells the above to the musicians with whom she's collaborating over the next week. They include colleagues she met at the Guildhall School of Arts and Drama in London where she earned her graduate degree: Detta Danford, Ross McDouall, Heather Truesdall, and Natasha Zielazinski. They include Daniel Trahey, the Peabody Preparatory faculty member, coordinator of Peabody's Tuned In program, and director of artistic program development for the Baltimore Symphony Orchestra's OrchKids. They include five Peabody students: junior clarinetist Sabrina Caminero, senior trumpeter Eliza Minster, senior percussionist Saul Green, sophomore cellist Heidi Bauer, and graduate student pianist Dongni Xie.

And they include about 100 students, spanning first grade through high school, from four Baltimore City Public Schools: West Baltimore's New Song Academy, Lockerman-Bundy Elementary School, Mary Ann Winterling Elementary School, and northeast Baltimore's City Neighbors High School. And they behave like kids. About 15 minutes prior to Warne addressing them, the room was awash in the dull roar that fills school cafeterias, buses during field trips, and the classroom when a substitute can't control the chaos. They would file in in groups, pile puffy winter coats on the floor against a wall, and break off into groups or take seats on the hardwood floors. Guys showed each other dance moves. Young girls paired up, faced each other with their legs crossed, and started clapping games. Some older kids crowded around the piano onstage and played snippets of melodies.

Soon Trahey called the room to order so that Warne could tell everybody what was going on. In 2009 she founded Creative Connections, a collaborative crucible to bring music education/opportunities to city school kids. This 2013 session is Connections' fifth outing and the second year in a row that it has been offered as a for-credit Peabody class called Creative Leadership Immersion. The class' lone lesson plan is both breathtakingly simple and monstrously intimidating: Over the next five days everybody in Griswold Hall is going to collaborate on a piece of music that they're going to perform at week's end in front of about 600 of their City Schools peers and then for their family, friends, and whoever else wants to check them out. That's all.

Hence telling everybody about Britten, the 20th-century British composer produced a wide range of works, from operas to lieders to film scores; he even developed pieces specifically for amateurs and children. Warne and Creative Connections aren't interpreting his music. He's going to be a vague starting point, an idea well that gets the process going. As Warne informs the kids before getting started, "We want you guys to write your song."

Warne says that every year she has a momentary pang of doubt, wondering if she and her Creative Connections partners are going to be able to pull it off. "As a matter of fact, every year I have that fear," she says with a laugh during a phone interview midweek through this year's project. "But never once has there been a failure, and that's what I always tell myself."

Warne is the director of Creative Connections, and this sort of workshop-driven collaborative music-making effort is the kind of project she puts together and works on. She's learned to trust the process and the young people's commitment to the material that they have a part in creating.

But she didn't have the track record to point to when she first launched the program in 2009, and it was a matter of finding like-minded people who saw the value in what she was trying to achieve. "I had been at the Guildhall and I had done a Master of Music Leadership and learned about creative music making, creative workshop leading, and just looking at music in a more collaborative and inclusive way," she says. "And I moved back to the states and wanted to bring some of that flavor here."

She found similar spirits in Trahey, Peabody director Jeffrey Sharkey and his wife Alison Wells, Frances Belcher of the Greater Baltimore Youth Orchestra (now known as the [Baltimore Symphony Youth Orchestras])(http://www.bsomusic.org/main.taf?p=11,6), and the Baltimore School for the Arts' Chris Ford, whose early support of the idea helped her get the program going. The first year's experience was powerful enough to keep everybody involved wanting to come back.

Not just for the music that's created—although if last year's concert is proof, what they create is ecstatically performed—but for the experience itself, a collaborative process not always found in public education or conservatory training. Warne compares it to the group camaraderie of a sports team or tight group of friends, the shared sense of working together toward some goal that builds a sense of self and community.

"I think that's a really strong and unique and powerful thing," Warne says. "I think that the kids are super empowered by it because the whole process is saying yes all the time, and any idea goes, and why not go for something that maybe some other teacher might say was impossible or that you've never really been given the opportunity to try before? And you see the [adult] leaders trying stuff and making mistakes and just going for anything and it just sort of brings this whole attitude where it's, like, Why not? Let's try it. You can do it."

That coming together is witnessed in but a few days. On Sunday Warne's collaborators Detta Danford, Ross McDouall, and Natasha Zielazinski led the entire group through exercises in working in unison and following a director: One would clap, make a series of hand gestures, or a vocalization of some sort, and the entire group would respond in kind. Repeat as necessary until it starts to feel like a tight unit. They then broke into smaller groups by school and worked on ideas for portions of the eventual music piece for about an hour before coming together to share them with the entire group. What came out of those brief sessions were very rough sketches: a snippet of group-written lyric married to a melody sketched out of a few notes. Altogether they added up to about 30 seconds of disconnected song.

By midweek those faint sketches were ripening into full-fledged tune. On Wednesday morning the City Neighbors High School kids, Peabody students, Trahey, Warne, and visiting Guildhall instructors sit in chairs arranged in an oval inside the music room of City Neighbors High School in the Hamilton neighborhood. They've arranged themselves somewhat into sections. Trahey, with his tuba, stands back with the rhythm section of students on a drum kit, electric bass, electric guitar, and conga drums. Danford and her flute sit with the other winds and horns. Warne and Truesdall sit among vocalists. McDouall stands at one end, improvising hand signals to correspond to the song's parts.

He forms a "V" with his hands to signify the verse. One hand shaped like a "C" and the other hand holding up a single finger means chorus one; "C" and two fingers, chorus two. He makes karate chops with both hands to indicate a rustling change. And then he takes his hands, "So when you get the horned fingers that's when the horn section comes in," McDouall says. "So let's vamp around the A and I'll cue the horn head and [we'll move] out of the horns and into the chorus."

One, two, three, four: The rhythm section starts up, and what used to be a melody lightly sketched in a few notes now has a bustling Latin beat behind it. McDouall counts off a few measures making horns with his fingers, which causes a brassy punctuation to jump into the beat, and anybody that was sitting still in the room begins to bop along to the bouncing groove. Vocals come in, they run through it for a few seconds, and McDouall stops them and they talk a few things out. Different hand signals are introduced for different changes and parts. Trahey talks with the rhythm section and tries a few subtle changes, playing a part and asking if they should try that twice as long. The students play it through, A then F then back to A and back to F. Yes? Yes. That works. And then run through it again as an entire group, and even though it's about 25 seconds of music, it no longer sounds like a still-forming idea. It sounds like damned funky jam.

It's a process that Warne and the Creative Connections teams have learned to trust: young people making something are going to take it and make it their own. "Just a few weeks ago I did a project with the Grand Rapids Symphony with 45 young people there and the audience was over 2,000 people in DeVos Hall," Warne says of a February 16 program where she worked with kids in the Grand Rapids African-American Youth Chorus and they shared a bill with gospel music veteran and Grand Rapids favorite son Marvin Sapp. "It was on a formal symphony concert and it was terrifying. And then when we were onstage, the kids nailed it so far beyond my expectations and there was an instantaneous standing ovation. And it's remembering that somehow that happens every time."

The 2013 Creative Connections concert takes place at City Neighbors High School on Saturday, March 23, at 2 p.m. The concert is free and open to the public.