David Peters, an expert in the study of health systems, has been appointed chair of the Department of International Health at the Johns Hopkins Bloomberg School of Public Health. Peters' research focuses on improving health systems performance, particularly for the poor in low-income countries, and solving policy issues that affect many aspects of public health. He will assume his new duties on May 1. 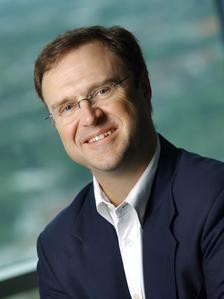 "David is a superb leader and manager. He has been at the forefront of creating new approaches to allocating international assistance and to building health systems of the future," said Michael J. Klag, dean of the Bloomberg School of Public Health. "David will be leading a world-class department and he will continue to remain focused on research, education, and service that improves health conditions for poor and vulnerable populations around the world."

A native of Canada, Peters attended the University of Winnipeg and received his Bachelor of Science and earned his medical degree from the University of Manitoba. He first came to Johns Hopkins in 1993 as a resident in general preventive medicine and to receive his Master of Public Health and Doctor of Public Health degrees. Peters then joined the World Bank. In 2002, he returned to Bloomberg School of Public Health faculty while continuing to have responsibilities at the World Bank. In 2009, he assumed leadership of the Bloomberg School's Health Systems Program and became associate chair of the Department of International Health.

Peters succeeds Robert Black, who has chaired the Department of International Health since 1985. Black will remain with Bloomberg School of Public Health as director of the Institute for International Programs, which works with governments in low-income countries to improve maternal and child health and nutrition.

The Bloomberg School's Department of International Health seeks to understand health problems and develop means of disease reduction and health protection in underserved populations around the world. Established over 50 years ago, it was the first academic department of its kind, which created the academic discipline of public health. Faculty and student researchers are leading initiatives to improve cost-effective health care delivery; design health interventions for disadvantaged communities; develop new vaccines; and find new methods to assess nutritional satus and treat nutritional diseases.