In his second season as head coach, Andy Enfield, the all-time leading scorer in Johns Hopkins men's basketball history, has led Florida Gulf Coast to the Atlantic Sun Conference tournament championship and an automatic berth in the NCAA tournament. It marks the first trip to the tournament in the history of the FGCU program. 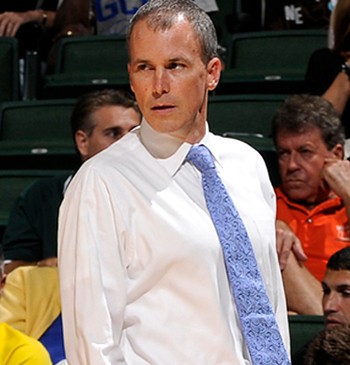 The Eagles (24-10) defeated top-seeded Mercer 88-75 on Saturday to become the first team to earn an spot in the tournament's field of 68. Complete tournament pairings and seeds will be announced Sunday, March 17.

"This is a special moment for our program, our athletic department and the university," Enfield, who has led FGCU to 39 wins in his two seasons at the helm, said in a release. "We came into the tournament determined to defend and we did that. Today we added one of our best offensive performances of the year against the best defensive team in our league. I'm very proud of everyone involved with our program because it took everyone to accomplish this."

Enfield scored 2,025 points in his career with the Blue Jays, leading the team to a 68-40 during his four seasons and back-to-back NCAA Division III tournament appearances in 1990 and 1991. He still holds 18 school records, including field goals made (680), three-point field goals made (234), and free throws made (431).