Christiane Amanpour, CNN's award-winning chief international correspondent and one of the world's leading opinion makers, has accepted an invitation to address the 2013 graduating class of the Johns Hopkins School of Advanced International Studies at the school's commencement ceremony on May 23, Dean Vali Nasr and SGA President Jim Pearse announced in an email to the SAIS community today. 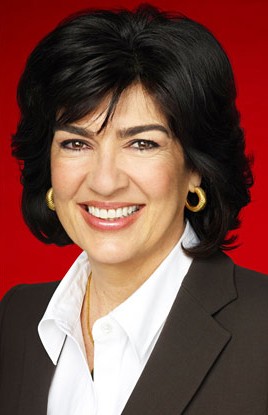 Amanpour also serves as the anchor of Amanpour, a nightly foreign affairs program on CNN International, and the global affairs anchor for ABC News.

"Her tremendously accomplished career in journalism spans three decades, with her first major assignment for CNN being the coverage of the 1990-1991 Gulf War," the announcement said. "Since then, she has reported from every major world news event and interviewed top leaders from around the globe. Her reporting has been deeply influential on critical global issues, most notably the war in Bosnia throughout the 1990s.

"The Student Government Association of SAIS is honored to have Ms. Amanpour deliver this year's commencement speech. Given her world-renowned acumen in foreign affairs, it is deeply gratifying that Ms. Amanpour will address the class of 2013 as they mark this important milestone and embark on the next chapter in their careers."