Johns Hopkins sophomore Paul Bewak was named the Centennial Conference Wrestler of the Year on Monday, becoming the first Blue Jay to earn the distinction. 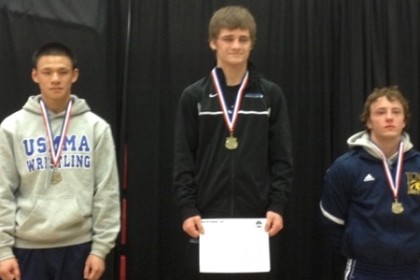 Bewak, who competes at 125 pounds, owns a 31-3 record and has won a school-record 22 consecutive matches. He defeated Chris Donaldson of Ursinus 2-1 on Saturday to win his second consecutive conference title and is currently ranked No. 2 nationally among Division III wrestlers at 125 pounds.

Bewak was joined on the all-conference first team by JHU teammates Paul Marcello and Christian Ostrowski. Marcello, a senior, won the conference championship at 141 pounds over the weekend, his fourth consecutive league title. Ostrowski was the only freshman in the league to win an individual title as he claimed the top spot at 165 pounds.