Juniors at suburban Philadelphia high school among 360 to ace test

How rare is a perfect SAT score? Extremely rare. Of the nearly three million students who took the SAT last year, only 360 achieved a perfect score of 2400, according to the College Board, the organization that prepares and administers the test. For the less mathematically inclined, that's about one one-hundreth of a percent. 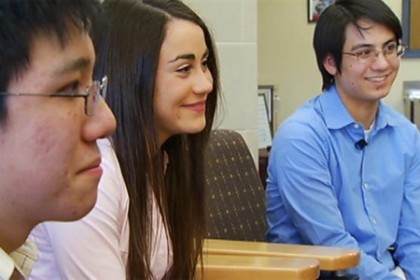 Three of the students—Julie Baldassano, William Raynor, and Benjamin She—are juniors at Upper Dublin High School in Montgomery County, Pa., north of Philadelphia. And all three say the Johns Hopkins Center for Talented Youth, which exposed them to the SAT as middle school students, played a key role in their success.

"We all agree that this early preparation is the reason we were able to succeed," Baldassano said.