John Ranagan and Brandon Benn scored three goals apiece, and the Johns Hopkins men's lacrosse team pulled away in the second half for a 15-6 season-opening victory against Siena at Homewood Field on Friday. 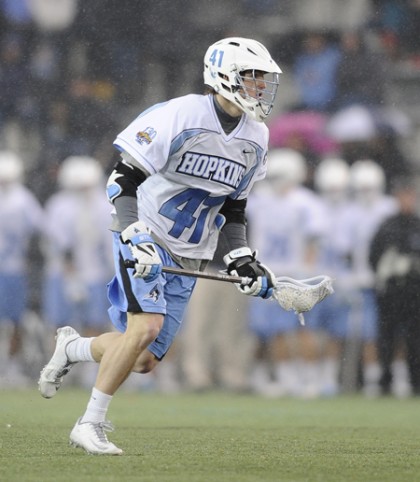 Image caption: Junior Rex Sanders, who had one career goal before Friday, scored twice against the Siena.

The fourth-ranked Blue Jays (1-0) led 6-4 at halftime, but used an 8-1 second-half run to put away the Saints. Junior Rex Sanders netted the first of his two goals with 6:30 to play in the third quarter, ending a 15-minute JHU scoring drought, and the Blue Jays added three more scores over the next three minutes of play to take command.

Conor Prunty's fourth goal of the evening for Siena (0-1) made it 10-5, but Johns Hopkins followed with another 4-0 run to put the game away.

Wells Stanwick, Lee Coppersmith, and Sanders added two goals apiece for JHU, which outshot the visitors 58-26 and owned 39-17 advantage on ground balls. Senior Pierce Bassett and junior Eric Schneider combined for 14 saves in goal for the Blue Jays, who visit Towson on Saturday at 7 p.m.