How owls rotate their heads without injury

Scientists explain how bird can rotate its head without cutting off blood supply to brain; lack of such adaptations could explain why humans are more vulnerable to neck injury 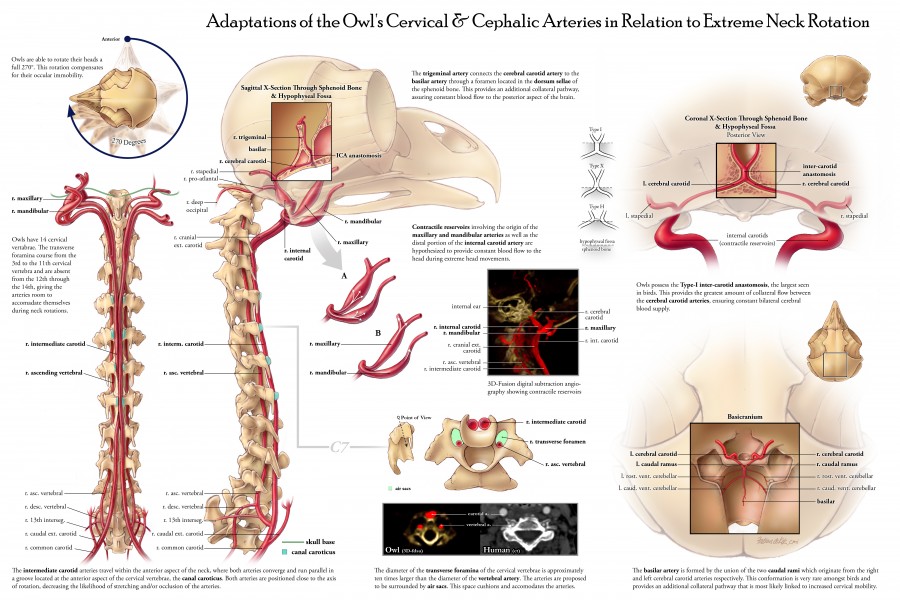 Image caption: The Hopkins team's findings are acknowledged in the Feb. 1 issue of Science, as first-place prize winners in the posters and graphics category of the National Science Foundation's 2012 International Science and Engineering Visualization Challenge.

Johns Hopkins Medicine reports that a team of Hopkins experts, led by medical illustrator Fabian de Kok-Mercado, have figured out how owls can almost fully rotate their heads—without damaging delicate blood vessels in their necks and heads, and without cutting off blood supply to their brains. Their study, acknowledged in the Feb. 1 issue of Science, found four major biological adaptations designed to prevent injury from rotational head movements.

Researchers say that the lack of such adaptations in humans could explain why humans are more vulnerable to neck injuries caused by sudden gyrations of the head and neck--whiplashing car accidents, jarring roller coaster rides, or chiropractic manipulations gone awry.

"Until now, brain imaging specialists like me who deal with human injuries caused by trauma to arteries in the head and neck have always been puzzled as to why rapid, twisting head movements did not leave thousands of owls lying dead on the forest floor from stroke," says study senior investigator and interventional neuroradiologist Philippe Gailloud, M.D. "The carotid and vertebral arteries in the neck of most animals - including owls and humans - are very fragile and highly susceptible to even minor tears of the vessel lining," adds Gailloud, an associate professor in the Russell H. Morgan Department of Radiology at the Johns Hopkins University School of Medicine.